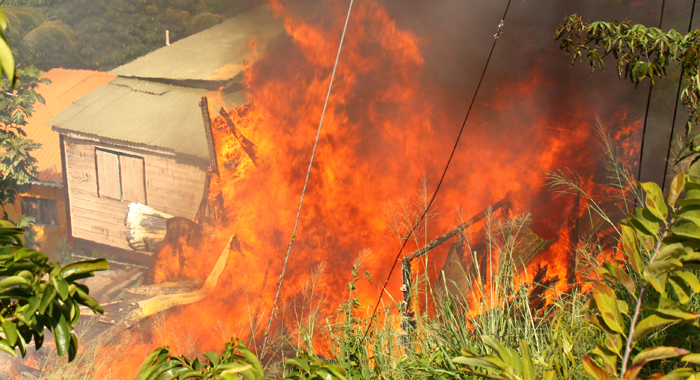 An early afternoon fire, which residents of Long Wall say they believe was an act of arson, destroyed two wooden houses in the East Kingstown community on Tuesday.

One of the houses destroyed belonged to Cane Garden resident, Shonette Williams, who had recently purchased it and was planning to move in from her rented accommodation at the end of this month.

Station Sergeant of Police, John Henry, of the Fire Department told iWitness News that police received a call sometime after 1 p.m. about a fire at Long Wall.
He said firefighters responded immediately, but when they got there, they met one house already gutted by the fire and the blaze was threatening another house.

Henry said firefighters tried their best to contain the fire but there is no hydrant in the area and they had to go to a hydrant and come back, which resulted in the fire spreading to and destroying another house.

He told iWitness News that there were no reports of injuries as a result of the fire and firefighters had no theories as yet about what started the blaze.

Meanwhile, Williams, 35, told iWitness News that she had recently purchased the two-bedroom wooden house where the fire started.

She said she was downtown, Kingstown when she received a call about the fire.

The mother of three children, ages 13, 9 and 7, said someone else was living in the house and had been given until the middle of this month to vacate the premises.

Williams told iWitness News that she had lodged several complaints with police after a woman had told her repeatedly that she would set the house on fire.

Now, her plans to leave rented accommodation at the end of this month and the EC$5,000 she paid for the house have gone up in flames.

“I feel a kind of how, but somehow I have to get back my payment… It ain’t going down like that,” she told iWitness News.

“If you keep telling me you go burn down my place, who burn it down now?” she said and speculated that the woman who had threatened to burn the house had done so.

Williams told iWitness News that after hearing about the fire, she also filed another report with police Tuesday afternoon.

And, firefighters were able to save the home of Williams’ would-be neighbour, Alison Rodriguez, who was among the first persons to discover that the house was on fire.

Rodriguez told iWitness News that she was in her house and saw smoke coming from outside.

When she went outside, she said Williams’ house on fire.

Rodriguez said she attempted to put out the fire but her efforts were futile.

She then started to wet her own house. As the flamed threatened the wooden dwelling, officers from the Special Service Unit help to remove the content of Rodriguez’s home.

Her house was not damaged beyond being scorched by the blaze.

“The fire was coming from inside, actually,” she told iWitness News.