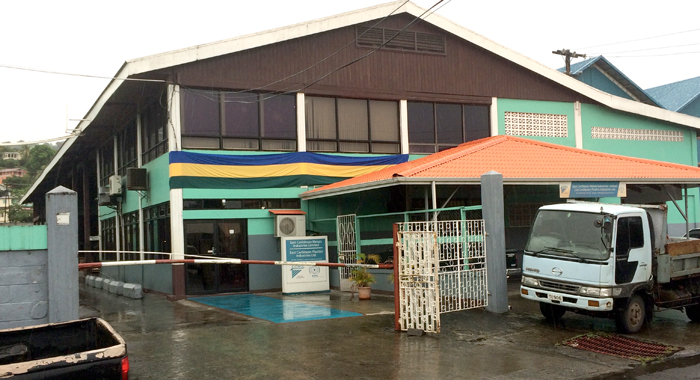 A security guard is in hospital and two suspects said to be in police custody after a shooting at East Caribbean Metals Industries Limited (ECMIL) (“Galvanise Factory”) at the Campden Park Industrial Estate Monday night.

At least two men are said to have robbed the guard at ECMIL and East Caribbean Bottlers Inc. (Ju-c), located next door, where they are suspected of stealing at least two cases of the energy drink Village Ram.

An official at ECMIL, who did not want to be identified in this story, told iWitness News on Wednesday that the guard who was shot is Eugene Gordon, an employee of Guardsman.

She was shot while on duty at the ECMIL compound sometime around 1:45 a.m. Tuesday.

Two other Guardsman security guards along with ECMIL’s own security personnel were on duty at the time.

The company official said that the guard who is stationed in the booth at the entrance of the compound would ring a bell if they need to get the attention of the workers inside the factory.

Monday night, when workers responded to the bell, they heard a gunshot as they exited the factory.

On hearing the gunshot, the workers rushed back inside. Some moments later, when they checked again, they saw Gordon in the yard of the compound, holding her belly, where she was shot, the official said, citing the reports of staff and other security personnel.

The robbers are said to have taken Gordon’s phone before fleeing on foot.

The official told iWitness News that it was the second time in weeks that there was an intrusion at the company.

He said a few weeks ago, someone came onto the compound and the company’s watchman heard them in the lunchroom. When he responded, the intruder held onto him and brought him in the direction of the guard booth at the entrance of the compound.

Gordon was also on duty at the time and men were working inside the factory.

She rang the bell and the intruder ran.

Meanwhile, an employee of ECMIL who responded to the shooting, said he was at home when he received a phone call around 1:40 a.m., saying he should go to ECMIL because the security guard had been shot.

The employee said that when he got there, he was told that the assailants had jumped the fence and ran up the road.

He said that based on the information he received, he advised the police to go in the direction of Lowmans Bay.

The police caught two suspects in the Ole Buff area of Campden Park.

One of them was hiding under a vehicle with a case of Village Ram, believed to have been stolen from Ju-c.

Another was caught lying in a drain some distance away. The second suspect is said to have had a gun, some money and two cellphones — one belonging each of the watchmen at Ju-c and Gordon.

Meanwhile, the ECMIL official said the company will be beefing up its security.

He further said that he thinks businesses in the industrial estate are becoming a target for criminals.

“I talked to other businessmen around and they say try to ask the authorities to step up on the patrol … with police. More police presence should be in the industrial area,” he said.

On Aug. 10, around 2 p.m., five masked assailants, two armed with guns and three carrying cutlasses, robbed the Agricultural Input Warehouse Depot at the Campden Park Industrial Estate of an undisclosed sum of money.

After the robbery, the assailant jumped over a fence at the back of the building, and ran in the direction of Lowmans Bay.

Police are said to have two suspects in custody in connection with Monday’s shooting. However, no one has been so far been charged.

One reply on “Suspects nabbed moments after guard was shot”