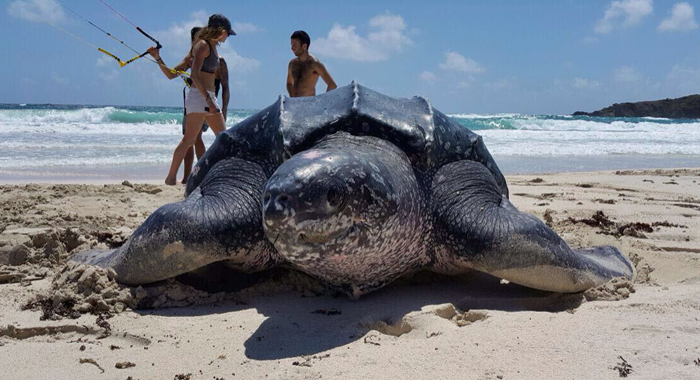 Come Jan. 1, 2017, it will be totally illegal to kill sea turtles in SVG. Here, a large leatherback photographed in Mustique.

St. Vincent and the Grenadines (SVG) will as of Jan. 1, 2017 make it illegal to catch or kill sea turtles or disturb their nest.

Prime Minister Ralph Gonsalves announced the planned change in the law on Tuesday at an event in Calliaqua to mark the upgrade of the fisheries facility there.

Under the current law, sea turtles are protected species in SVG, with the open season running from Aug. 1 to Feb. 28.

But during the open season, it is illegal to catch, sell, buy or have in one’s possession undersized turtles or their shells.

The minimum weights for sea turtles that can be caught during the open season are: leatherback turtles — 350 lbs; green turtles — 180 lbs; hawksbill turtles – 85 lbs; and loggerhead turtles — 160 lbs.

It is always illegal to interfere with the eggs and nests of sea turtles.

Anyone found violating these regulations is liable to a fine of up to EC$5,000.

But Gonsalves said Tuesday that his government has been working with SVG Preservation Fund in which Louise Mitchell, daughter of former prime minister Sir James Mitchell, and Canada-born naturalised Vincentian, singer Bryan Adams, is involved.

The upgrade of the facility was funded by Japan under a US$4.6 million grant secured in 2014.

Gonsalves said also addressed the issue of whaling in SVG, where humpback whale are killed in Bequia and pilot whales ad other cetaceans are killed in Barrouallie.

“And there is nothing inconsistent with our traditional whaling and whale watching,” Gonsalves said.

“And I know a lot of our young folk are interested not so much in the actual traditional whaling, but in whale watching, which is a legitimate activity. I think you do it in Japan too,” Gonsalves said.

He was speaking at the ceremony in which Ambassador of Japan to SVG, Mistuhiko Okada, expressed appreciation to SVG for the “valuable cooperation” it has long been extending to Tokyo in International Whaling Commission (IWC) matters.

Observers say that the fisheries facilities that Japan builds or upgrades in countries such as SVG are payback for their support in the IWC, which conservationists say Japan uses its money to dominate so that it can continue commercial whaling under the guise of scientific research.

Gonsalves, however, said that the wanted to indicate to the Japanese that there is a strong conservation movement that is growing, “which means that we have to have a proper education about the sustainable use of marine resources.

“I want to say, and I’ll make this announcement because Cabinet has already decided that as of January the 1st, in keeping with the mantra, no extinction in our generation, that we are imposing a complete ban on the hunting and killing of turtles and also of the eggs.”

Gonsalves said that a project for turtle watching was already being devised.

He said that the beaches between Colonaire and Black Point and up at Sandy Bay at Big Sand on St. Vincent’s north-eastern coast are two main places in St. Vincent where turtles nest.

The prime minister further said his government is doing a lot of education in schools.

“And believe me, young people around the country, apart from in the areas like Colonaire and Gorse and Byera and so forth and up in Sandy Bay, they don’t know that we eat turtle. They say, ‘What? People eat turtle?’” Gonsalves said.

He said while there is a conservation “challenge” with one of the species of turtles in SVG’s water, his government will protect all four species that live here.

He made it clear that he was not talking of banning traditional whaling.

Ms Mitchell also campaigns against whaling and has urged whalers to switch to whale watching.

Gonsalves said there is work to be done “to do many innovative things and to educate the whole world in relation to the sustainable use of our marine resources, including in relation to whaling and on a scientific basis.

“And I know that you will help us in those respects and work with us properly,” he said to the Japanese officials at the event.

“And I am sure that you will help us to have sustainable livelihoods in whaling, even away from traditional whaling, which, of course, a section of the population is very much attuned to and which is part of our history and part of our culture.

“So I am being open to the discussions which are taking place in the country and in the population at large. And, as these changes occur, we ourselves in our relations have to adapt to these changes and to strengthen the nature of our relations for sustainable livelihoods generally and to maintain our relations and to let them lift further in our own interest: your interest and our interest,” Gonsalves said.

5 replies on “St. Vincent to outlaw killing of sea turtles”