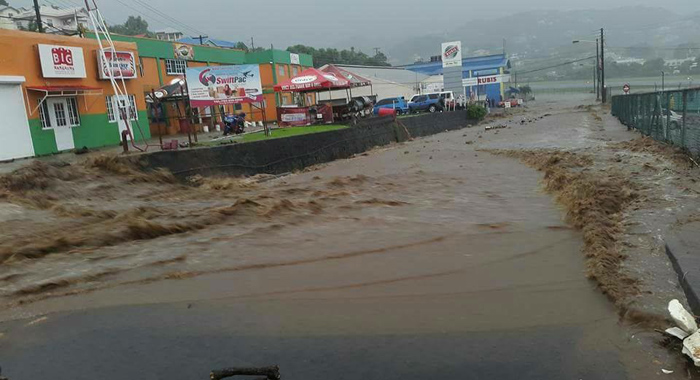 Flooding in St. Vincent as a result of a trough system in November 2016.

Disaster response officials on Wednesday cancelled classes and ordered non-essential civil servants to remain at home as St. Vincent and the Grenadines experienced flooding and landslides as a result of an overnight surface trough system that continued to affect the country into daylight hours.

A number of private businesses also announced closures while other announced later opening hours because of the inclement weather.

There were numerous reports of flooding and landslides the main island, St. Vincent, but no reports of deaths or injuries as a result of the heavy rains.

Capital city, Kingstown, was flooded out early in the morning, and the National Emergency Management Organisation (NEMO) said it had received reports of flooding in a number of areas, including Arnos Vale, where the E.T. Joshua Airport is located; Calliaqua, a town east of Kingstown, and the interior agriculture community of Vermont.

In Mesopotamia, another agricultural district in the interior, there were also numerous reports of landslides. The situation at a house in Glenside, Marriaqua, where a retaining collapsed in heavy rain on Sunday, was worsened by Wednesday’s downpour, and was further threatening other properties in the area.

NEMO said 9 a.m. that an update from the Meteorological Office one hour earlier said the trough system will continue to affect the country.

“All civil servants are asked to remain at home today.However, essential workers are to report to work when it is safe to do so. The Ministry of Education has advised that schools will remain closed today,” Deputy Director of NEMO, Michelle Forbes, said.

She said the National Emergency Operations Centre (NEOC) has been activated and all sub-committees were asked report to the NEOC when it is safe.

“The National Emergency Management Organisation, through the St. Vincent and the Grenadines Meteorological Office will continue to monitor the situation,” Forbes said.

In an update via the National Broadcasting Corporation (NBC Radio), Garth Saunders, manager of the Central Water and Sewerage Authority, said that the country had received some five inches of rain since the showers began.

He said the CWSA has partially shut down the municipal water system and if the rains continue to fall heavily, the systems would be shut down during the day.

Saunders urged householders to fill up water in case the systems have to be shut down.

He reminded listens that the Hurricane Season has not ended and urged persons to report any burst water mains to the CWSA.

And, speaking separately on NBC Radio, Prime Minister Ralph Gonsalves said that he had postponed today’s Cabinet meeting to Friday and ordered area representatives to stay in their constituencies.

He said Minister of Work, Sen. Julian Francis had mobilised his staff to begin cleanup operations.

Gonsalves urged persons living near rivers and in landslide-prone areas to be especially careful, noting hat life, unlike, property, cannot be restored.

The Prime Minister aid he was in communication with the Forbes at NEMO and other relevant public servants.