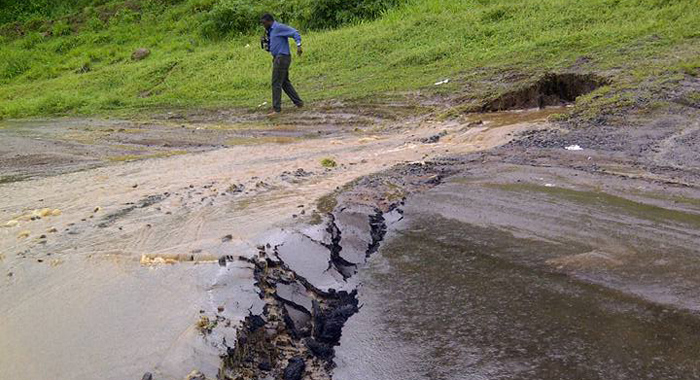 The by-pass road constructed two years ago as a detour around a section of the main highway outside the Argyle International Airport, collapsed on Thursday forcing a total closure.

Minister of Transport and Work, Sen. Julian Francis announced the closure of the road on state media Thursday afternoon, sometime before the road failed completely.

“It is unfortunate that, following weeks of torrential rain, we have again developed some challenges on the road going along the Argyle airport,” Francis said.

The collapse of the road resulted from further land slippage in the area triggered by heavy rains associated with a trough system that has been affecting St. Vincent and the Grenadines since Tuesday.

The total collapse of the road comes days shy of the two-year anniversary since the government was praised for building within three days a by-pass around the section of the road that first collapsed late November 2014.

Speaking on the National Broadcasting Corporation mid-afternoon Thursday, Francis said there had been soil movement from early Thursday morning.

He told listeners that the Chief Engineer, Brent Baily, and his staff — who visited the area on Thursday — had advised that the road be closed to vehicular traffic.

He said that motorists travelling northwest will take a detour through Calder and Mesopotamia and re-join the Windward Highway at Peruvian Vale.

Vehicles travelling south to Kingstown would turn right a Peruvian Vale, travel through Yambou and Mesopotamia then chose to travel either over to Belmont and down to Calliaqua or through Calder.

Francis said traffic is not being diverted onto the old Argyle Road because of the heavy showers and floods.

“We are doing some work, which should take us about two weeks down there to get the river crossing perfectly safe in case of substantial rains and flooding.”

He reiterated that all vehicles on the Windward Highway will be diverted through the interior of the country.

Francis said persons who know the Akers Road could use it and make a decision about route when they get to Crick Corner.

“The permanent solution to this is being finalised and I wouldn’t be able to give you a timeframe on that with regards to the closure of that piece of road, but with the Mt Coke entrance, exiting at Peruvian Vale, … within two weeks, we will have a permanent solution at the river crossing. But, just in case we have days like today and as we have been having since Tropical Strom Matthew [in early October], you can have safe crossing down there.

“There is too much water on the road and too much flooding on the river for us to divert you down there,” Francis said.

The transport minister said that persons living at Mt Pleasant as well as persons going to the International Airport Development Company’s offices could use the Mt Coke gap to travel to or from Kingstown.

The inclement weather this week has resulted in flood and landslides across the country, as well as the death of a 12-year-old boy in Bequia, while an 8-year-old resident of Campden Park is missing and presumed dead after being swept away by flood waters, also on Wednesday.

Francis said his ministry is continuing to clean up the landslides across the country.

“I ask persons to be cautious, drive carefully on the by-pass – on the detour, on the Yambou pass and going through Mespo and Calder. They are not as comfortable roads as the Windward Highway and we ask you to drive with caution and be considerate of other road users,” he said.

Forecasters said Thursday eventing that a trough system will continue to generate cloudiness, showers, periods of rain and isolated thunderstorm across Saint Vincent and the Grenadines tonight into tomorrow.

The National Emergency Management Organisation warned that soils are already saturated and urged residents in areas prone to flooding and land slippage to continue to exercise caution and be on the alert.

The forecast through 6 a.m. Thursday was “generally cloudy with some moderate to heavy showers, periods of rain and isolated thunderstorms”.