Mother believes son who was washed away has died 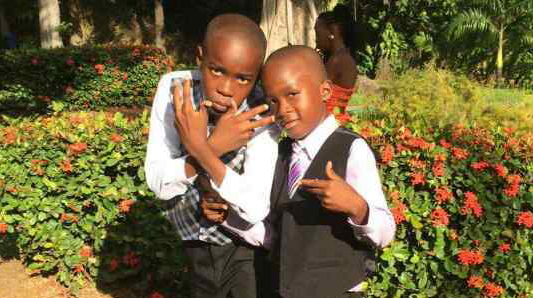 Jaafaan May, left, survived, but his younger brother, Jayquan May is missing and presumed dead.

The mother of the boy who was washed away by floodwaters on Wednesday says she does not believe that he survived but would be happy if his body is recovered.

Jaafaan May, 10, and his younger brother, 8-year-old Jayquan May of Campden Park, were washed out to sea by a river outside their uncle’s house, into which their mother moved Tuesday night after her rented house in another area of the South Leeward village began to flood.

Jaafaan was able to swim back to shore at Roucher Bay, after being washed about a half mile downstream and out to sea, but his brother was carried further out to sea by the current, his mother told iWitness News on Thursday.

The mother, Shaoma Baptiste of Campden Park, said she had sent the boys to a shop Wednesday morning to buy an item to prepare for their breakfast after hurriedly moving into the house the night before.

“The rain was coming but not as heavy,” Baptiste told iWitness News.

She said that she was packing out their possession when the boys told her around 8 a.m. that they were ready for breakfast.

Baptiste said that when the boys returned from the shop, Jaafaan told her that he wanted to take a bath since he did not do so the night before.

She said his younger brother said that she wanted to take a bath also.

While the house, located along a side road bordering the Campden Park Industrial Estate, is habitable, it is incomplete and the pipe is in the yard, to the front side of the house.

Baptiste said that while the boys were bathing outside she could hear them, but after a few minutes, she noticed that she was no longer hearing their voices.

She said that when she went outside to check on them, her 5-year-old son told her that his brothers had gone into the “river”.

The “river” is, in fact, a small stream/gutter to the back of the house. The water level rises when there is heavy rain, as was the case on Wednesday, when a trough system dumped five inches of rain on St. Vincent and the Grenadines, beginning around 11 p.m. Tuesday.

“And I did not wait. I head for down Roucher Bay,” Baptiste said of her reaction to the news that her children had gone into the river.

She said that while she made her way to Roucher Bay — where the stream empties into the sea, she had doubt that her children had in fact gone into the river, as she had warned them not to go near the stream, reminding them of the boy who was crushed by a boulder in Layou during the passage of Tropical Strom Matthew last month after he disobeyed his mother’s instructions not to go outside.

Baptiste told iWitness News that when she got to Roucher Bay, she saw person bringing the older of the two boys out of the sea, and then she believed that they had in fact been swept away by the stream.

When iWitness News visited the scene on Wednesday, a resident of the area pointed out a huge boulder in the stream near the house where Baptiste lives and said that the boulder causes the water to go onto that property whenever there is heavy rains.

“All I want right now [is that] they find the body. That’s all,” a teary-eyed Baptiste told iWitness News.

Asked is she believes that her son is dead, Baptiste said, “Yes.”

“He (Jaafaan) said when they reach by the sea, he had to let go his brother’s hand. He said when his brother drifting out, all he crying, ‘Mommy! Mommy!’,” Baptiste told iWitness News.

She told iWitness News that Jaafaan told her that he held onto his brother’s hand until they were in the sea.

Jaafaan is in hospital with an injured kneecap and other injuries he sustained in the ordeal.

Jaafaan is officially listed as missing as his body has not been recovered.

Baptiste noted that persons were already criticising her action, but explained the circumstances in which the incident occurred.

“I don’t have any pipe inside. I just moved. It is my brother’s house. It is not fully finished but as the house I was renting — right now, it is flooded out. I had to move [as an] emergency,” she told iWitness News.

In addition to Jayquan, who is missing and presumed dead, 12-year-old Phillip Compton of Paget Farm died Wednesday, reportedly after falling and injuring his neck after being swept away by floodwaters as he and a relative attempted to clear a drain.