Karma is visiting the ULP gov’t 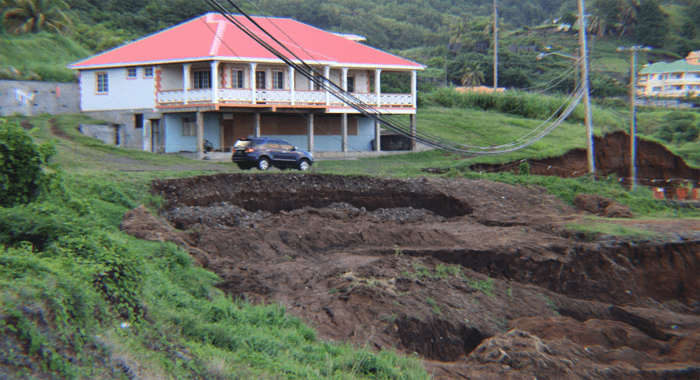 The land the house is on is original land; below the road is all slipped fill.

About a month ago I started inspecting the section of road at Argyle that has now collapsed and it was very obvious that sooner or later that that was going to happen.

The photo above was  taken on Nov. 4, 2016 — before the final slip. It was then at a critical stage because the landslip was now right up against the road.

When the bypass road was built, they carved through a hill and filled the big chasm on the other side with the burden carved from the hill. The big chasm was made by seasonal water outpour from the hills over the centuries. The fill was not compacted and like the soil behind Mr Jack’s wall that collapsed, it acted like a sponge until the weight was so great it turned semi-fluid and simply flowed down the excavated face that the airport engineers had foolishly carved below it. So there was simply nothing to retain it; nothing to support or keep it in position.

If you remember, I told you some time before that the government never fully paid Messrs C.O. Williams, the road contractor for the Argyle bypass road and the company eventually left the country still being owed $20 million dollars. They hung around for more than a year waiting to get paid, and then left, allegedly owing some money to employees and NIS, telling the government if the government doesn’t pay them then they, in turn, are unable to settle with their employees and others. I did check last year with C.O. Williams Ltd. of Barbados and they confirmed by email that, at that time, they were still owed that money. So, I suppose if you believe in karma, the SVG government is now being punished for its failure to once again pay its debts.

The danger now is what may happen to the airport fuel farm, a 100 or so feet further down the road, which is also built on filled land. The northeast corner of the fuel farm compound is washing away and requires urgent attention. If the storage tanks should slip when full, the airport may exist no more and may be renamed Argyle Lunar Base — relocated on the moon.

I did notice that the runway on that day, four hours after the rain had stopped, had water rising through the runway and was puddled because the camber is not correct, or even there at all.

They say things have to get worse before they can get better. But not in SVG and in particular Argyle Airport where things are getting worse continuously, with nothing better on the horizon.

One reply on “Karma is visiting the ULP gov’t”