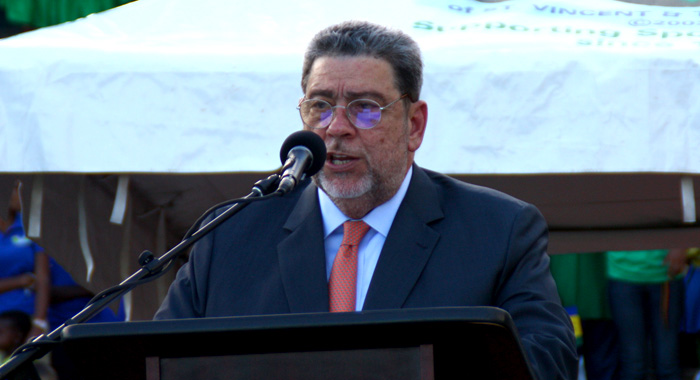 Prime Minister Ralph Gonsalves is leading a four-member delegation to the global climate change talks taking place in Morocco from Nov. 7 to 18.

The presence of Gonsalves at the 22nd Session of the Conference of Parties to the United Nations Framework Convention on Climate Change (COP22) represents the highest-ranking official that St. Vincent and the Grenadines or any of its CARICOM counterparts has sent to the talks in recent years.

The presence of Gonsalves and his delegation — though it contains no technical experts — would undoubted be welcomed news to CARICOM negotiators, who have lamented the failure of some members of the bloc to send negotiators to the climate change conferences, even as these countries lament the impact of climate change.

The other members the Vincentian delegation are the prime minister’s wife, Eloise Gonsalves, his press secretary, Hans King, SVG’s Ambassador to the United Nations, I. Rhonda King, and businessman Dwight Hillocks.

Last year, Kingstown sent then Minister the Environment, Clayton Burgin, who was quitting politics, and his predecessor, Douglas Slater — CARICOM Assistant Secretary-General for Human and Social Development — to the climate change negotiations in Paris.

Gonsalves is attending the talks at a time when president-elect of the United States, Donald Trump, is said to have selected one of the best-known climate sceptics to lead his U.S. United States Environmental Protection Agency (EPA) transition team.

Myron Ebell, director of the Center for Energy and Environment at the conservative Competitive Enterprise Institute, is spearheading Trump’s transition plans for EPA, U.S. media has reported, citing sources.

Last year, during the United Nations climate talks, activist pasted mug-shot posters on walls and lampposts around Paris. The posters depicted Ebell, a climate contrarian, as one of seven “climate criminals” wanted for “destroying our future”.

Trump, who is scheduled to take office in Jan. 20, is said to be looking at quick ways of withdrawing from the Paris climate agreement in defiance of widening international backing for the plan to cut greenhouse gas emissions, Reuters has reported.

COP22 will take over the reins from COP21, held in Paris, during which the world agreed a climate deal intended to keep global temperature increase to less than two per cent above pre-industrialization levels.

On Oct. 5, the conditions for the agreement’s entry into force were met when some 55 countries, accounting for 55 per cent of all global greenhouse gas emissions, ratified the agreement.

Since then, more than 100 countries have ratified the agreement, from which Trump says his administration will withdraw, thereby putting the agreement at risk of failure.

The Morocco meeting will focus on action items in order to achieve the priorities of the Paris agreement, especially related to adaptation, transparency, technology transfer, mitigation, capacity building and loss and damages.

Salaheddine Mezouar, president of COP22, said this year’s conference is an “opportunity to make the voices of the most vulnerable countries to climate change heard, in particular African countries and island states. It is urgent to act on these issues linked to stability and security”.

Signatories to the Paris Agreement now have to develop their national adaptation plans. Nizar Baraka, president of the COP22 Scientific Committee, said, “… we must encourage our respective countries to commit in a strong way to sectors related to the green economy [as well as the blue economy] in order to take advantage of associated growth and job opportunities.”