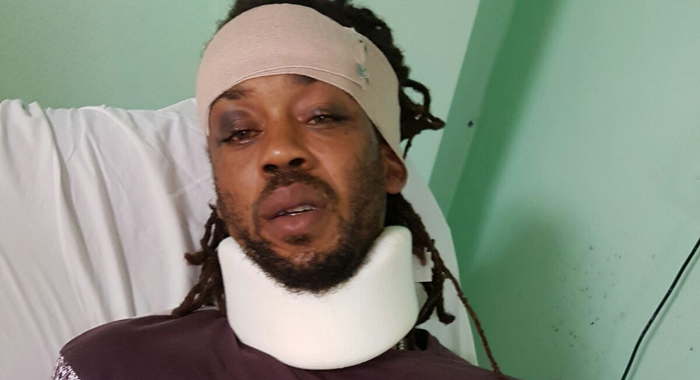 Shemroy Stowe was hospitalised, reportedly after being beaten by police. He has since been slapped with 5 charges.

A Bequia man was Sunday transferred from the Port Elizabeth Hospital to the Milton Cato Memorial Hospital with a neck brace and injuries to the head and other parts of his body, reportedly after he was beaten by police Saturday afternoon, the second such beating this year.

The man is 31-year-old Shemroy Stowe of Friendship, Bequia.

His father, Norville Stowe, told iWitness News on Sunday that his son left their home around 2 p.m. Saturday to drive to Port Elizabeth to fill a prescription.

He said that shortly after, he heard people shouting near their home and then the sound of a gunshot.

Stowe said he then heard someone calling him saying that police officers were beating his son.

The father said that as he was going to check on his son, he saw Shemroy staggering toward him, crying.

He said when he got to the area where police reportedly beat his son, he saw his son’s red SUV at the side of the road and white car parked on the road.

Stowe said he inquired of the officer about what happened and they told him to stand aside. At that time, persons who had gathered at the scene was telling the man that the police had taken “advantage” of his son and had beaten him for no reason.

The father said that a police officer then told him that they were going to search his son’s vehicle for drugs.

He said he then stood at the side of the SUV to observe the search and a police officer told him to move.

Stowe said he maintained that if the police were going to search his son’s vehicle, he would witness the search.

The police found nothing illegal in the vehicle and drove off, Stowe told iWitness News.

Stowe said his son spent Saturday night in hospital in Port Elizabeth, before being transported to Kingstown at 4:30 p.m. Sunday.

One of the police officers came out the car and pointed a gun at the man, who is said to have reversed onto a bump, causing his jeep to go off the side of the road.

The father said that his son told him that when he exited his vehicle, the police started to rough him up, so he grabbed the hand in which the police officer had the gun.

The son told his father that one of police officer then held him in a neck lock, while the other beat him in the head with the but of his gun.

Police are said to be alleging that Stowe was injured when his vehicle went off the road.

The father said that persons who were in the area corroborated his son’s story and some of them say they are willing to travel to St. Vincent to testify about what they saw.

The father was also displeased with what he said was the response to him by the sergeant in charge of the Port Elizabeth Police Station.

He has alleged the senior officer told him that had he been there, the father would have seen what would have happened to his son, then told him to leave “my station”.

The father said that the police also beat his son in June and brought several charges against him, but not of them came to court to give evidence, resulting in the charges being thrown own.

iWitness News understands that a lawyer acting for Shemroy was expected to file sometime this week a suit against the police for the allegedly beating they inflicted on him earlier this year.

One reply on “Man allegedly beaten by police twice in months”