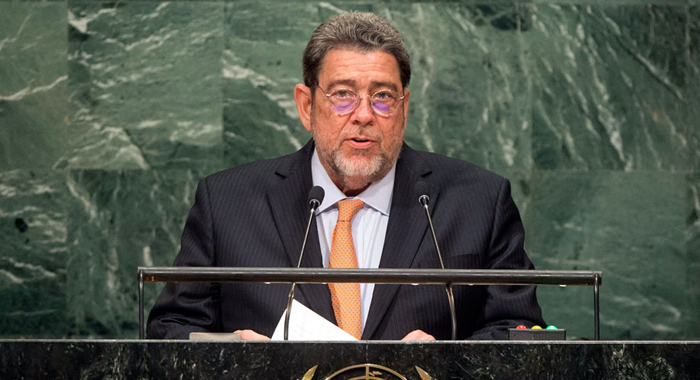 Prime Minister Ralph Gonsalves has echoed at the global climate change talks talking place in Morocco the call of other developing country parties to quadruple, at least, adaptation finance mobilised through public interventions.

Gonsalves told the High-Level Segment of the 22nd Session of the Conference of Parties to the United Nations Framework Convention on Climate Change (COP22) that on access to finance for climate mitigation and adaption, the mobilisation of funds is a precondition to access.

“US$100 billion per year by 2020 is just a floor, which we are yet to reach. One hundred billion dollars is woefully inadequate,” Gonsalves said.

He added: “We need to start planning our 2025 goal and ratchet up support for SIDS and other particularly vulnerable countries. Also, I call again for simplified access to the climate funds, as promised.”

Gonsalves told the conference that as the world welcomes the entry into force of the climate accord reached in Paris last year, the reality in St. Vincent and the Grenadines, a small island developing state, is that between 2010 and this year, loss and damage from natural disasters amounts to some 40 per cent of our country’s GDP.

“One disaster, a tropical trough, on Christmas Eve 2013, accounted for loss and damage estimated at 17 per cent of GDP,” Gonsalves told negotiators.

“Indeed, in recent years, we have been suffering from highly abnormal torrential rains and consequential landslides. Last week there was another such extreme weather event causing immense damage and loss of life. The poor are the most adversely affected,” he said.

Gonsalves said that his government has this year allocated one-third of its total capital budget towards the strengthening of the country’s resilience to natural disasters.

“This is separate from additional monies spent on loss and damage as a result of climate change. The allocation of substantial resources to climate resilience adds hugely to our country’s debilitating public debt,” he said.

The prime minister told the conference that the per capita efforts of island states towards the global goal of emissions reduction need to be recognised and matched by developed countries.

“After all, it is developed country parties that have agreed to take the lead in climate change mitigation. In St. Vincent and the Grenadines, by the end of 2019, 80 per cent of our electricity generation will be by renewable energy. Meanwhile energy efficiency measures continue apace, but far more financial support is required.

“I would like to emphasise that these issues must be addressed not just at the political level, but also at the technical level. Political will is a necessary ingredient but these words must be manifested in deeds and in the technical decisions under the various bodies including the CMA (Parties to the Paris Agreement), CMP (Conference of the Parties Serving as the Meeting of Parties to the Kyoto Protocol), COP (Conference of the Parties) and subsidiary bodies.

“The political document coming out of Marrakech should be focused on action, support and implementation of the Paris Agreement,” Gonsalves said.

He said that for all states globally, especially small island developing states, negotiators have “no option but to remain focused to address concretely, and urgently, man-made climate change despite occasional dissonance and set-backs arising from certain quarters.

“By 2050, Mother Earth is expected to contain in excess of 10 billion people, up from about 8 billion today. We are each other’s neighbors in this globalized world. Thus all peoples and governments have an obligation to act responsibly to protect the global commons and our common humanity. There is really no other option for survival and sustainable development. This is a matter of existential consequence to humanity,” he said.

The conference is taking place from Nov. 7 to 18.