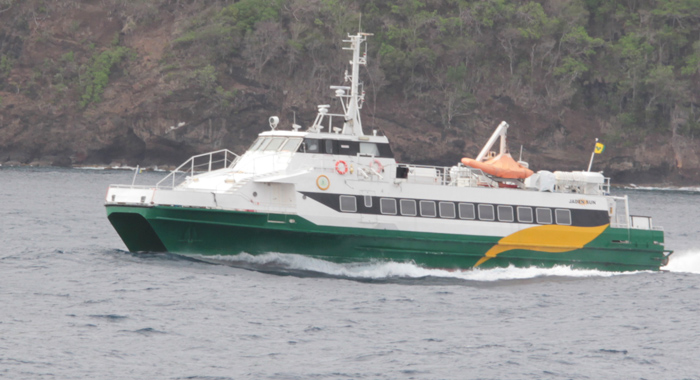 The high speed craft, Jaden Sun, which makes the 36-mile journey between Kingstown and Union Island in two hours — about one-third the time of regular ferries –will cease operation in St. Vincent and the Grenadines (SVG) next Tuesday, Nov. 29.

Cashena Gooding, manager of Jaden Inc., the company that owns the vessel, told iWitness News on Sunday that it is a business decision that her company regrets having to make.

She confirmed that the vessel will be operating in the Leeward Islands but declined to comment further about the specific ports of call.

In a brief statement on Friday, the management of Jaden Inc. announced the cessation of service in SVG.

“We thank you for your patronage over the years and regret any inconvenience caused. It was a pleasure serving you!” the statement said.

Since the announcement, persons have noted that the government had given the owners of the vessel a US$100,000 loan to replace one of its engines.

IWitness News noted that persons have been pointing to this fact, and Gooding responded: “I am glad that you said a loan. It was a loan that we are repaying. We did not get it for free.”

Prime Minister Ralph Gonsalves announced the loan to the company in February 2014 at which time he said the vessel was out of service because one of its two engines had gone bad.

He said then that the fast ferry is an important service but it is very expensive to run.

He said that for a round trip between Kingstown and Union Island, the Jaden Sun burned EC$6,000 worth of fuel.

The owners of the Jaden Sun were losing money even when the ferry was operational, the Prime Minister said.

In September, iWitness News began looking into a report that the vessel will begin sailing between Montserrat and Antigua.

Back then, Gooding told iWitness News that the vessel was proceeding on dry-dock and the crew was going on their annual vacation from Sept. 27, and had issued a notice in that regard.

Asked then if there was any plan to stop providing the service in SVG, Gooding said, “If and when that is so, the public will be notified. If that is the case, and it ever becomes that we are going to do that, we will inform the public.”

She told iWitness News on Sunday that at the time of the conversation in September, nothing had been finalised.

Gooding said that a number of persons have come to inspect the boat and to discuss possible ventures, but nothing was finalised until Friday, when the announcement was made.

She noted to iWitness News the US$100,000 price of the engine and said it could give an idea of how much the entire vessel cost, adding that in addition to the loan from the government, the company also owes commercial banks.