Eustace regrets St. Vincent didn’t have him as PM for longer period 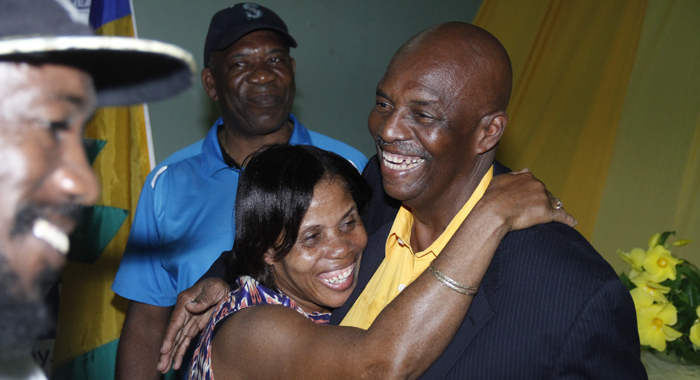 Outgoing president of the New Democratic Party and immediate past Leader of the Opposition, Arnhim Eustace, said Tuesday night that he is saddened that he was “not availed the opportunity to chart a new course for the development of our people as Prime Minister for any significant period of time”.

He, however, said that his regrets are not personal, but relate to the benefits that could have redounded to the people of St. Vincent and the Grenadines, if he were given a longer stint at the helm of government.

Eustace said this was the reality despite his best efforts, those of the NDP, and the overwhelming support of Vincentians.

“There are so many people — children whose parents struggle to send them to school regularly or even to pay for the examinations they need to take in order to have a fair chance in their adulthood to break the cycle of poverty; young adults burdened with the hopelessness brought about by lack of opportunity and a stagnant, oft shrinking economic landscape; those lucky enough to have sustained employment through these hard times while witnessing their NIS funds misused and squandered; those suffering from the British American and CLICO fiasco; those in need of medical attention forced to rely on the inadequate health facilities … How many unavoidable deaths have occurred?

“And battered and exploited women and children. Given the opportunity many of them would have been reaping the rewards of principled, creative, fiscally prudent management of the country’s affairs, harnessing our potent human and agricultural resources,” Eustace said.

Eustace, 72, was prime minister for the final five months of the NDP’s 17-year reign.

He inherited the prime ministership from Sir James Mitchell, who transitioned to a new leader five months before early general elections, which he had agreed to in order to end intense protests by the then opposition Unity Labour Party in early 2000.

Eustace, as prime minister, announced those elections for March 28, 2001 and the NDP, which had eight seats in the 15-member Parliament, was only able to retain three while the remaining 12 went to the ULP.

The ULP repeated those results in 2005, but in 2010, saw its hold on the Parliament falling to a single seat majority, which it also repeated in 2015.

Eustace, five-time Member of Parliament for East Kingstown, which he has been representing since 1998, will hold that post until a suitable replacement candidate is found, he told party supporters and media audiences during an address from the NDP’s headquarters, Democrat House, Tuesday night.

Eustace, however, said that his disappointments about not having a longer stint as prime minister “are buoyed by my certainty that the institution known as the New Democratic Party is better than ever, stronger than ever and built to stand the test of time.

“So that when that inevitable day dawns, that day of justice for our disenfranchised populace — this team is poised to take the reins of government and create the optimum environment for the talented citizens of this great nation to realize our potential as a people.”

Eustace, an economist, who told Tuesday’s audiences that he has been a public servant for 44 years, said that a friend asked him recently if had any regrets about not returning as prime minister.

He was referring to the NDP’s claim that the 2010 and 2015 elections were stolen.

The party is challenging the results of the 2015 vote in court, but regional and international observers have said that the vote represented the will of the people.

“I have regrets that these fine men and women of the leadership of the NDP, a cadre of men and women who make up the best leaders St. Vincent and the Grenadines has to offer, have been cheated of the opportunity to give back to the country they love as mandated by the people.

“But I stand here tonight hopeful. I believe there is an emerging new generation within the NDP that will take the struggle to remove this illegal family-owned government to a new level,” Eustace said.

He further said that he believes that Vincentians now have a greater understanding of the connection between Government policy and the economic realities they face every day, in part because of his “persistent weekly ventilation of this relationship” on radio.

MP for the Northern Grenadines, Godwin Friday, a long-standing vice-president of the NDP, has been chosen by his colleagues as leader of the opposition.

He will face a challenge by his fellow vice-president, St. Clair Leacock, for the party presidency at an extra-ordinary convention on Sunday.

The NDP will hold a regular convention early in the New Year in which it will elect the remaining members of the executive.

5 replies on “Eustace regrets St. Vincent didn’t have him as PM for longer period”