Anesia thanks Eustace for giving her an opportunity in politics 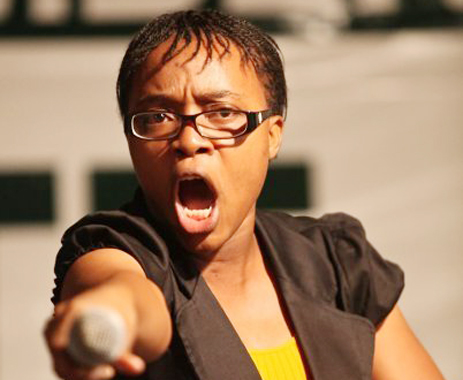 Anesia Baptiste was a leading voice in the “Vote no” campaign of 2009. (Photo: Oris Robinson)

Head of the small Democratic Republican Party (DRP), Anesia Baptiste, has thanked outgoing president of the main opposition New Democratic Party, Arnhim Eustace, who hired then fired her from the senate almost five years ago, for giving her a chance in politics.

Baptiste expressed her gratitude to Eustace in a call to his weekly radio programme on Monday, which he was hosting for the last time as president of the NDP, a post he will relinquish at the party’s convention on Sunday, six days after he stepped down as Leader of the Opposition.

“Mr. Eustace, I wanted to call also to join with others and to thank you very much for the service you have rendered to the nation of St. Vincent and the Grenadines, our home,” Baptiste said.

“As a young person entering into politics and political work, you recognised my talent and gave me an opportunity to serve not only within the New Democratic Party  — of course along with all the other persons — but also in the Parliament in our country, where we do not usually have a lot of young persons and young women.

Baptiste, a national scholar, entered politics in 2009 when she was a lead voice in the campaign against proposed changes to the nation’s constitution.

She joined with the NDP and convinced the electorate to reject the changes in a referendum that political observers say was, in fact, a vote on the Unity Labour Party administration, which would have lost government 13 seats to 2, were the referendum, in fact, a general election.

Baptiste, then a state-employee, was slapped with 16 charges, after the public service said she violated its regulation.

She was suspended on half pay, and later resigned from the public service.

The NDP, however, went on to lose the 2010 general election, with the ULP retaining office by a single seat majority although the NDP captured four of the seats it held in the previous Parliament.

Eustace then appointed Baptiste, and Vynnette Frederick, a lawyer and NDP spokesperson as senators.

However, two years later, Baptiste disagreed with Eustace over an NDP policy about not making untoward comments about persons’ religions and wrote him a strongly worded letter voicing her objection.

The letter was also widely circulated and many regarded its tone rude and disrespectful and its contents incomplete because Baptiste did not include in it her resignation.

Baptiste had moved up the ranks of the NDP very quickly, rising to

Assistant Secretary General but losing in a bid to become the party’s chairperson.

She was also selected as the party’s candidate for West St. George, a selection that was revoked after her fall out with the NDP.

Baptiste went on to form the DRP in 2012, but failed to make an impact in the 2015 general elections, garnering less than half a percentage point of the popular vote.

At the end of Baptiste’s call, Eustace thanked her for her comments.