Eustace hints at full term as MP for East Kingstown 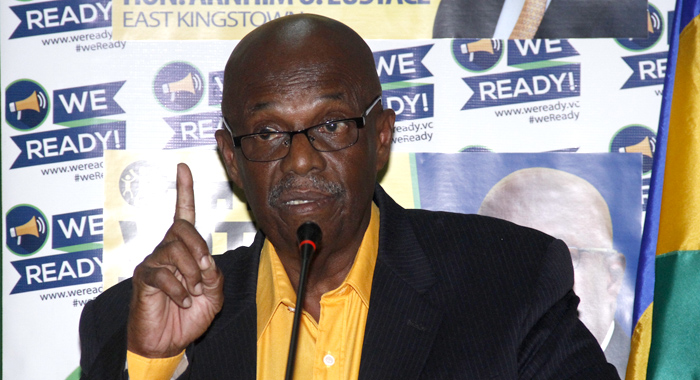 Member of Parliament for East Kingstown, Arnhim Eustace, has suggested that he will serve out his full, fifth consecutive term as area representative although he has stepped down as Leader of the Opposition and president of the New Democratic Party (NDP).

“The people of East Kingstown have given me a mandate to serve them this term — and I intend to serve them fully as their elected parliamentary representative,” the 72-year-old politician said in an address to members and supporters of the NDP Tuesday night.

“Even as I do so, I will continue our ongoing conversation about who will take the mantle and move forward with the people of East Kingstown,” he said, adding that throughout his tenure as leader of the NDP, he had had the unwavering support of East Kingstown.

“You have stood with me through every struggle and you have fought hard with me in every battle. In moments of self-doubt, you have provided clarity. You have always been the inspiration.

He said he understands the feeling of his constituents very well, adding, “but I have always felt that the hallmark of a good leader — whether on a cricket team, in a business or a political party — is to decide, in the best interest of the organisation, when is the best time to transition to new leadership.

“Importantly, that time must be sufficient to enable the successor to find his/her stride and define his/her leadership before going into general elections,” said Eustace, who became leader of the NDP in October 2001, five months ahead of early elections that his successor, Sir James Mitchell, had agreed to amidst political protests in early 2000.

“I believe that, strategically, this is the right time for us,” Eustace said.

He used his speech to pay tribute to “the beautiful people of East Kingstown”.

“Five times I have offered myself to you and five times you have welcomed me with open arms. Love you all,” Eustace said.

He said his constituents are his family and the entire nation will remember that for 10 years, 2001 to 2010, “despite theft and irregularities nationwide, you represented the last bastion of democracy on mainland St. Vincent”.

East Kingstown was the only seat on St. Vincent Island that the NDP won in the 2001 and 2005 general elections, which the ULP won by a 12-3 margin.

“Ms Norma! Thank you for your strength, for your care for me, and your charity toward the less fortunate in the Walvarou. Ms Providence, I thank you for your integrity, clarity, quiet industry and wisdom. You have never had to raise your voice in order to be heard or respected. Chewey and Denrick Woodley, undeniably born soldiers and strategists – I salute you. And Ms Patricia Chance who has soldiered tirelessly in my constituency, forever vigilant, forever vexing people, forever standing at the frontline of the fight for free and fair elections in East Kingstown — Thank You!”