Convention delegates told not to be ‘voting cattle’ for NDP 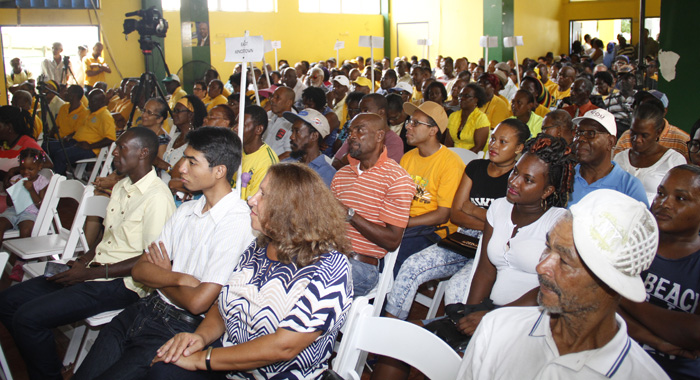 A section of the crowd at the NDP’s extraordinary convention in Kingstown on Sunday. (IWN photo)

As the main opposition New Democratic Party (NDP) prepared to elect a new leader on Sunday, party chairman, Linton Lewis told delegates that they must not be “voting cattle”.

“As I prepare to open another important chapter in my life I want to make this statement abundantly clear: you the delegates of this or any other convention are not voting cattle,” said Lewis, who earlier this year said his future in politics is uncertain after four electoral defeats.

“Your power must not only be seen within the context of your vote at an annual convention, you must take an interest in the operations of the party,” he told the gathering of mostly delegates at Democrat House in Kingstown during the open session of the convention, ahead of the closed-door leadership selection exercise.

“In that way you will be supporting the leader,” Lewis said, telling the delegates that their responsibility is to assess the stewardship of the people that they elect to serve on the party’s executive.

“You are required to advance the cause of the party by asking this one simple question. ‘In your respective role as an executive member what has been your contribution?’”

He said that in recent times, NDP supporters have been coming to convention after convention but never seem to have much interest in knowing how the executive has been functioning.

“The delegates must not be seen as voting cattle,” Lewis said, adding, “Whenever you elect an executive, it must be known by all that the members of that executive are accountable to you. Ask not what your party can do for you but what you can do for your party.”

He said one of the great attributes of a leader is his ability to motivate his followers to engage in voluntary work for his party.

“The understanding must always be that the success of the party is not only about winning a general election but also about rewarding those whose services have been vital to the party’s success.

“Victory is not only about ideas — it is also about effort. Victory is not about winning one seat or two seats or even seven seats — it is about winning as many seats as you can and in any event much more than your opponent. What this means is that the party’s view must not redound to the benefit of certain areas or about certain seats but realistically it must be about the whole and I mean all the constituencies.”

According to the official results, the NDP has lost the last two general elections by a single seat. However, the party has rejected the results amidst its claims that the ruling Unity Labour Party stole the vote to secure third and fourth consecutive terms in office.

The NDP is challenging the results of the December 2015 general elections in court.

Lewis, who has failed in four attempts to win a seat in the St. Georges districts — once in East St. George and three times in West St. George — said:

“Every candidate has a role to play in his constituency but at the end of the day it is the party’s presence, support and strength that will make the big difference on the day of the election.”

He said political parties are not just pressure groups.

“Political parties are not just about the strength of individuals or about success in one or two constituencies — political parties exist to win general elections — so whatever is done here today — no matter what you contemplate or how you feel about those competing for the position of political leader, your choice must be hinged on one factor, one singular reason, one purpose and one goal and that is a choice of leader that you strongly believe has the ability to take the NDP to victory in the next general elections,” he said.

“It is not solely about who is nice or who is aggressive or who is humble or about who is arrogant or who is charismatic. At the end of the day it is about the person who can mobilise and rally the party’s forces to victory on the day of the election. With that in mind, I once again remind you of the statement by John F. Kennedy but amended for today’s proceedings and that is; ask not what your party can do for you but you can do for your party.”

MP for the Northern Grenadines, Godwin Friday, was declared NDP president by acclamation after the other candidate, MP for Central Kingstown and fellow NDP vice-president, St. Clair Leacock, withdrew at the last moment.

Friday became Leader of the Opposition one week earlier when he his parliamentary colleagues voted him into that position left vacant as East Kingstown MP, Arnhim Eustace, told the party’s central committee that he was stepping down as party and opposition leader, after 16 years.