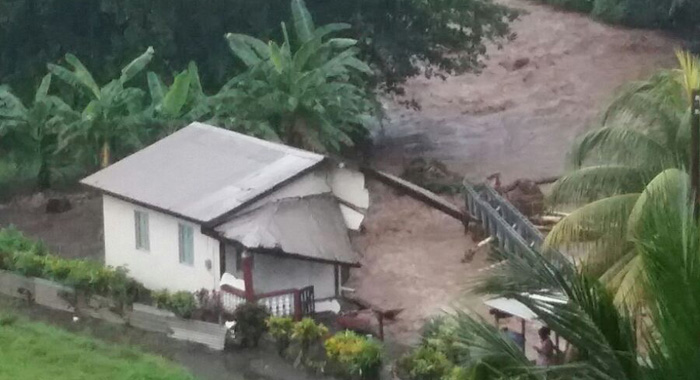 A house damaged as a result of the heavy rains and floods.

A number of houses were destroyed and other damaged in several areas in St. Vincent and the Grenadines, while floodwaters exposed the contents of some graves at the Sandy Bay Cemetery and blocked, damaged, or destroyed a number of bridges as a trough system dumped large amounts of rain across the country Monday night into Tuesday morning.

A flood warning remains in effect for SVG until 12 noon today, Tuesday, as heavy rains are expected to continue to impact the country.

Schools will remain closed today and all but non-essential workers have been ordered to stay at home amidst fears that saturated soils could give way to landslides.

Deputy Director of the National Emergency Management Organisation (NEMO), Michelle Forbes, said Tuesday morning that floods and landslides have already been reported in a number of areas in St. Vincent.

“We are asking persons to stay off the road. We already have floods in several communities in St. Vincent and we expect the rains to continue,” Forbes said.

She said NEMO has received reports of flooding in Rose Bank, Dark View, Vermont, Sandy Bay, Owia, and some areas of Georgetown,

“We are asking residents on [the] banks of all the major rivers in mainland St. Vincent to exercise caution. Do not wait until the rivers have started to overflow to evacuate to higher grounds.”

Forbes also urged persons living in areas prone to landslide to take precaution, adding that there were already landslides in Sandy Bay, which has cut off vehicular traffic to areas north of the North Windward community.

Forbes said that persons who do not have to be on the roads should stay at home and away from flooded areas.

“Stay away from those areas that can be flooded. We expect these rains to move across the middle of the island. Other areas may become impacted. Persons in areas like Mespo, Kingstown, we already have some flooding in Vermont, persons living in Buccament Bay, South Rivers, and along the major rivers that we have had flooding in the past, exercise caution,” Forbes said.

The flood watch for SVG that was issued on the weekend was upgraded to a flood warning on Monday.

A flood warning is issued when flooding is imminent or is already occurring.

The Barbados Meteorological Services says an eastward moving trough system that has been affecting the islands overnight, will continue to produce moderate to heavy showers, thunderstorms and gusty winds across SVGs throughout Tuesday morning.

Further rainfall accumulations of 125 mm (5 inches) are still possible during the next 12 hours, with higher amounts in mountainous areas.

Forecasters say the flood warning may be further extended should conditions become necessary.

NEMO said that the National Emergency Operation Centre (NEOC) has been partially activated and NEMO, through the Barbados Meteorological Services and the St. Vincent and the Grenadines Meteorological Office will continue to monitor the situation.

What to Do During a Flood WARNING

One reply on “Houses destroyed as rains trigger floods across St. Vincent”