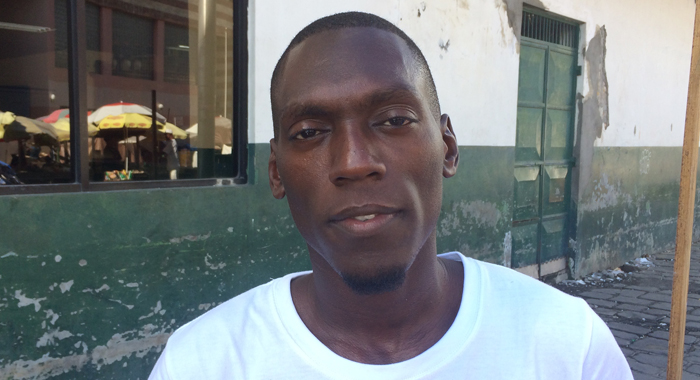 A radio personality says police manhandled him because he told them that he hopes they do not abuse two young men they had detained.

Adiah “Provie” Providence, who co-hosts the morning show on Xtreme FM, said he was   heading up to the Cruise Ship terminal to conduct some business around midday Monday when the incident occurred.

Providence said that while heading in that direction, there was a skirmish outside the gates to the terminal but he couldn’t see from where he was walking what was taking place.

“While going through the gate, there were two persons sitting on a bench [inside the security booth] and some police officers. One shouted out to me.”

Providence said that while he did not know the person’s name, recognised him as being from Rockies, where he also lived.

“As soon as the guy shouted out my name, the police officer proceeded then to close the door. So, at the same time I was passing, I said, ‘I hope you guys don’t abuse him in there.’ because I found it very strange that they closed the door while I was passing because while I was walking before the door was wide open.

“They closed the door and then the officer rushed out at me and said, ‘Providence, I know you’ and physically pushed me and said I must get off the compound,” Providence recounted to iWitness News.

Providence said he told the officer that he was just passing by and didn’t even know what was transpiring.

“He asked me what business I had there; I don’t work there. I said, ‘This is a public place. There are many businesses at the cruise ship terminal and there are also booths there for the ferries’,” Providence said, adding that while he had gone to the area to transact business, the police officer began pushing him.

“So I said, ‘Please do not push me. He is continuing in a very aggressive manner. He pushed me out of the small gate and I held on to the big gate — the larger gate for vehicular traffic. I said, ‘If you want me to walk, I can walk’ but he was manhandling me in such a way, very aggressively that I didn’t think it was dignified as a human being. I felt my liberty was at stake, basically, so I held my ground because I did nothing wrong. So I held on to the gate and told him please do not touch me.”

Providence said the police officer kept on saying that he knew Providence.

However, the radio announcer and activist said that the person referred to by the police officer was, in fact, his aunt.

“But all that is irrelevant. I thought that I was at liberty, if I was not breaking the law, I was not committing an offence, I was not obstructing the police from carrying out their own duties, I didn’t see the need for him to rush at me and physically manhandle me.”

Providence said that while holding on to the gate, another officer came by.

“Now, I would think that if he sees me holding on to the gate for my own freedom that the officer might have come to my assistance, because I was the one who was being manhandled. I wouldn’t go as far to say brutalised because there weren’t physical blows about my body at that time, except for wrestling [with] my hands.”

He said the second officer started to manhandle him even more viciously than the other officer.

“The first officer who came to me was PC 340 and then the other officer who came in a more vicious way was PC 788. While I was holding on to the gate, PC 788 threatened and moved beyond threat to physically try to break my fingers to remove myself from the gate.”

Providence said that in order to protect himself, he laid down on the ground.

His polo t-shirt was torn down during the fracas.

He told iWitness News that a large crowd was there even before he came on the scene.

“They kept on shouting and chanting. There are several videos going viral about the incident. They kept on chanting, ‘Let him go! Let him go! He didn’t do anything!’

Providence said that whenever he tried to get up to move away peacefully, the officers were pulling him.

“So, I couldn’t stand for that because he was making me look as if I was a criminal. I didn’t do anything and he was manhandling me. So I said, ‘I can get up but I can get up on my own. I have done nothing wrong. Every time I attempted to get up, they were pulling me in such an aggressive manner. So then I would go back down to safeguard myself from that abuse.”

Providence said that police then said they will allow him to walk.

He said he then walked over to the police booth and the police officers were talking to each other while he was sitting along with the other two persons who were in the booth originally.

He said he asked the police if he was under arrest, because at that point none of the officers had said why his liberty was being curtailed.

“The officers who were there on the scene, none of them could have answered.”

Providence said that a police vehicle came by, probably for the two persons they had detained before.

He said he understands that one of them was charged with possession of marijuana.

“‘I would have given you all some good kicks,’” Providence quoted the police officer as saying.

“The first thing that came to my mind was the comment that I made: ‘I hope that you guys don’t abuse the young men inside of there,” Providence said.

“I know as a person inside the media and I consider myself an activist as well, I know firsthand what happens to a lot of people in police custody. You saw the situation with Ari Shaw, the journalist at Searchlight, and I put myself in a similar vein that sometimes these police do so wilfully to try to humiliate you in the public domain.”

Shaw was roughed up by police who arrested him in Kingstown in July, on claims that he was involved in a fight.

The young reporter has maintained his innocence although he was found guilty in court and fined.

He has appealed the conviction.

Magistrate Bertie Pompey, who found Shaw guilty of the fray offence, later threw out an assaulting a police officer charge brought against him as a consequence of the same arrest.

Pompey, a former deputy police chief, said that a video shot by a member of the public and submitted as evidence, clearly shows that the police officers were the aggressors in the incident.

Providence told iWitness News that on hearing the comment of the RRU officer he felt justified in voicing his hope that the police not brutalise the young men they had in custody.

He said he was taken to CID, where his lawyer, Israel Bruce, visited and was assured by a senior officer that Providence would be released without charge.

The radio announcer, however, said he had to wait almost six hours before police told him he was free to go – without even interviewing him or taking a statement.

“They did not say anything to me… I went there like midday and I was sitting until 6 p.m., when someone came and said ‘You are free to go.’”

“I am of the view that I’m not going to waste my time filing to the public relations and complaints department because I do not feel — and it has been studied before; I do not agree with the notion that police officers should investigate other police officers. I think it is unfair; a lot of countries have moved away from that system and set up their own public complaints authority, which supervises police action.”

He said the response of the police to a recent incident in which an officer discharged his service pistol in public to try to quell a brawl between one of his colleagues and a civilian recently gives him no confidence that his report would be taken seriously.

“For instance, the case of the police officers who were fighting at Georgetown where there was a video that went viral, those officers, I am seeing them walking up and down Kingstown, yet to receive any disciplinary action.

“So I have no faith in that system. I have no faith also in the legal system because I am going to spend my money to bring civil action that may take years to go worm its way through the court system and I am not really prepared for that. I will continue to be on the vanguard for justice in St. Vincent, looking out for persons who are oppressed and down-pressed and victimised and marginalised. That is the most I will take from this experience. It will just sharpen me to keep on fighting and keep on standing up against these aggressive actions of the police.”

Providence, however, said he thinks that it is a minority of officers who act in the way he was treated.

He told iWitness News that he has a lot of friends who are police officers who are hardworking, dedicated and professional;.

“But, of course, there are always some bad eggs in the basket,” he said.