A clear sign of the times in St. Vincent 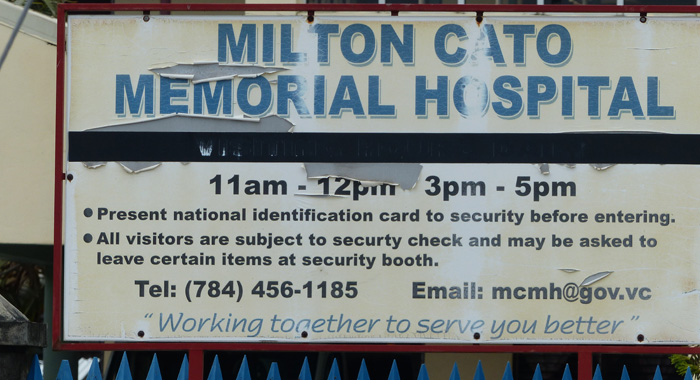 The Milton Cato Memorial Hospital sign is many signs at once. One: it is a dirge. At least, it looks like how a lament for the dead sounds. It is a recitation that the Ministry of Health and the hospital administration do not give a shit. That’s two. Three: it is a harbinger of the quality of medical service to expect. After all, the upkeep of the sign and the providers of the health service are overseen by the same operators. What you see on the outside is what you get on the inside. It is a buckle-up sign. If you there for the hospital’s lack of –, it tells you to buckle-up, the wait is going to be bumpy — a blunt euphemism, from what I hear. That’s four. Five: if you pulled through, it is an I-told-you-so sign on your way out. If you didn’t, then it is what it tells your loved ones on their way out. It should be given to Cedric Mills for him to dress it up and plant it in the plot of land next door.

It is a sign that extols the government’s apathetic and negligent pathologies. That is two in one; six and seven. Though, it must be said that the shabby, unkempt sign is very much in keeping with its environs: a run-down, filthy, dilapidated, aging capital. And depressing, too. The degradation of Kingstown — and of St. Vincent — is so ubiquitous that it is accepted straight. We see nothing else. Many have been born into it and it is a way of life. We are numbed to ugliness and filth from birth or by the cycle of learned helplessness. In truth, the run-downiness is so pervasive; is so accepted that even the Prime Minister is a victim of the apathy. He has stopped complaining — as he once did — about the potholes around Kingstown. Evidently, the architect of the dilapidation has joined the bandwagon and has been anaesthetised to his dilapidated architecture. He said he is in charge of every square inch. (Remember how he undilapidated the place in 2001? Never mind that poor Peace Mo still has the same coat of paint today. And his Rabacca Bridge never saw a scraping or a painting. But, as I have been saying, that is what we have come to expect and accept.)

If the Prime Minister drove on smooth road (which is testimony to my memory), he’d go, what the hell is going on in my land? Who is responsible for this reckless improvidence? Something funny is going on behind my back because we have no money. And if we had, it sure is not to fix no road. I am not going to take this sweetness lying down. If whoever think they can get away with it, well, they plain wrong. They don’t know me, dread.

Carrying on with his driver. I am going to get to the bottom of this smooth road project because the money should have gone to the airport. Is where all monies should go and have been going. I am building airport and somebody putting a spoke in my wheel with spending money to smooth up road. You see why I can’t get the bleeding millstone around my neck finish? Besides God and his damn rain (but it makes for good excuse, eh) I have to deal with this earthly skulduggery as well. I’ll sue who is responsible for this extravagance. End of the smooth road dream.

The PM can afford to drive on bad road because he drives a free car. And free fixing too. When he shocks and suspension buss lose, is like: man, watch, FedEx in the shocks and knuckles them. Call Silky and make sure them is the expensive, real OEM parts because the parts must be extra strong for the roads I-man provide. You see why that one deserves two places, six and seven? Coulda been three easy.

For sport, I have thrown in a picture, “Man and Dog,” to show a no so unregular Vinci tourist attraction. Now, ‘llow me explain the picture that is entitled, “The Entrance to Kingstown” The excuse the Prime Minister gave for buying the Ju-C building was that it is located at the entrance to Kingstown and he did not want it in the ownership of foreigners so that when he is driving into Kingstown, in a time yet to come, he does not have to face his grandson’s question about the building’s ownership, lest happily he’d have to say, foreigners — on my watch.

Granddad said that he would bend down in shame, pretending to tie his shoelace, hoping to duck the grandson’s question. (Comrade doan have to bend no how to not answer question. He does do that all the time. And good, too. He does do it standing upright, bolt straight and watching we full in we face, carrying we all round the Mulberry Bush. From Fancy to Larikai … on a slow pirogue.)

Well, in the picture, that ungodly sight of a stinking eyesore of a run-down building, plumb in what the Prime Minister calls “the entrance to Kingstown,” is the St. Vincent and the Grenadines customs building.   Shame, shame, shame on this wilfully filthy and wilfully negligent and wilfully apathetic government. Comrade, you can’t manage find no pink paint lef over from the Peace Mo do-over in 2001; to darb on your customs building for tourist to see now that the airport opening? And they coming in droves, too.

Do you remember what Son Mitchell said about this government, a time back? That they were like the village dog, barking and running down a car and when he catches it, lo, he doesn’t know what to do with it.

Son was not quite right because at least we have an international airport. Or do we?

2 replies on “A clear sign of the times in St. Vincent”