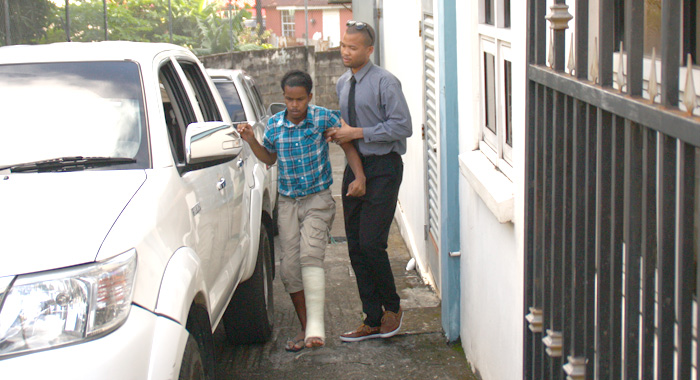 A police officer escorts Baptiste to a police vehicle outside the Serious Offences court on Monday.

Chief Magistrate Rechanne Browne on Monday set March 27, 2017 as the date for the commencement of preliminary inquiry into the murder of retired nurse Pamela Williams of Kingstown Park.

Baptiste, who is suspected of murdering two men and two women between Nov. 13 and 14, 2016, was charged last week with Williams’ murder.

He was first taken before the Kingstown Magistrate Court as the Serious Offences Court was not sitting.

He was remanded into custody then and the matter was transferred to the Serious Offences Court, which hears offences such as murder, drugs and firearm crimes, and conducts preliminary inquiries.

Williams’ is believed to be the last of the 4 murders committed within 3 hours on the night of Nov. 13.

He was cornered and apprehended at Williams’ home by villagers who had responded to her cries for help.

All four murder victims were viciously beaten in the head with blunt objects — believed to have been bricks, stones and concrete balusters.

The other three murder victims were: 35-year old Nicholas Layne of Edinboro, who was killed in Campden Park, and 47-year old Ronald Israel and his 75-year-old mother Avis Israel, who were killed in their Old Montrose home.