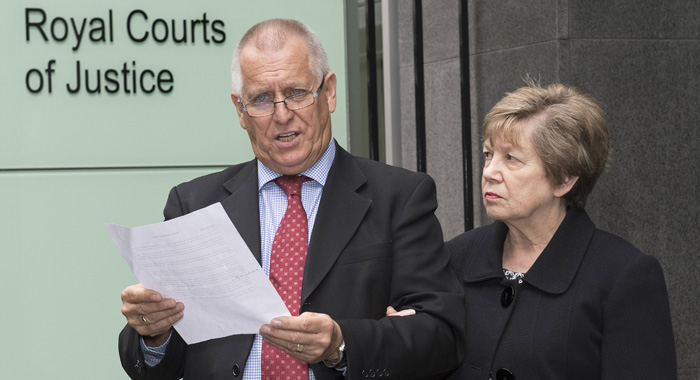 Dave and Carol Ames outside court in London on Monday.

Businessman Dave Ames, director of Harlequin, the company that owns Buccament Bay Resort, has welcomed the decision of a judge in England to order the company’s former accounting firm, Wilkins Kennedy, to pay Harlequin US$11.6 million, half the money it paid to construction contractor, ICE Group SVG, for work that it did not do on the resort almost six years ago.

“We have lived with the failings of Wilkins Kennedy and the nightmare of this case for years,” Ames said outside the Royal Courts of Justice in England on Monday after Justice Coulson handed down the judgement.

“The impact their actions have had on our investors, the success of our business, our public reputation, the happiness of our family and our own health is undeniable,” whose own negligence resulted in Harlequin being awarded only half of the sum it could have otherwise been allotted, according to the judge.

Ames further said: “Wilkins Kennedy should be holding their heads in disgrace. I trusted them as my accountants, and I cannot believe they were acting behind my back to help a fraudster get away with funding a lavish lifestyle. The fact that my former accountant, Mr MacDonald, has now gone into business with that fraudster since all of this came to light shows what a conspiracy all of this has been.”

“It is of no surprise that the aggressive and cynical tactics of the defendants were unsuccessful in distracting the court from the key arguments and evidence. With the sheer volume of mud that was thrown by the defendants, it was expected that some might make it to the judgment, but it was a price worth paying for today’s successful result. In fact, we are delighted the case has now resulted in such a strong judgment in favour of Harlequin and it vindicates what we have been saying for years. Today we have, at last, some justice. Tomorrow, we return to fighting to rebuild our business.”

Wilkins Kennedy said that although disappointed that the court did not dismiss the entire case, they are pleased that it has rejected the vast majority of Harlequin’s claim.

“The judge has rejected all allegations brought against us, apart from one.

“This related to the contractual relationship between the builder and the developer, where the judge viewed both parties to have contributed equally to losses arising from deemed overpayments to the builder,” said Tom Govan, communications director at Wilkins Kennedy.

But not withstanding his promise to return to business, Ames, who is facing theft and tax evasion charges in St. Vincent and the Grenadines, where he is a naturalised citizen might not receive any of the money awarded in the judgement.

Justice Coulson noted in his judgement that he “would not want that sum paid direct to Harlequin Property SVG, at least at this stage.

“My proposal is to have it paid into some sort of escrow account whilst the competing interests of the company, the liquidators (if they have been appointed) and, in particular, the investors are resolved. I would hope that this –or something like it — can be done by way of agreement,” the judge ruled.

Commenting on the case, Harlequin’s solicitor Richard Spector said: “The details of this case has been extraordinary. That individuals from a respected, top firm of accountants should act in this way is shocking. The position of our client Harlequin has been clear throughout this case. They were given bad advice due to a conflict of interest. Today’s judgment confirms this to be true.”

Hotel resort and property company Harlequin run Buccament Bay Resort, the only of the numerous Harlequin projects in the Caribbean and elsewhere to be actually built, even as the resort remains incomplete.

In 2013, in a case widely reported in the international media, Padraig O’Halloran, who ran the building company ICE Group employed by Harlequin, was ordered to pay £2 million he paid into his Irish Bank accounts due to the misappropriation of several millions of pounds from the Buccament Bay project. Accountants Wilkins Kennedy had taken on Mr. O’Halloran’s company as a client at the same time as Harlequin. At the court case in Ireland the judge used his judgment to say that O’Halloran and MacDonald were “in league” with each other.

Additionally, former Wilkins Kennedy employee Jeremy Newman publically apologised to Harlequin and the Ames family. His apology and departure from Wilkins Kennedy took place after it was revealed that he was the administrator of an anonymous website alleging that the business operated by Harlequin was a fraudulent scheme. Wilkins Kennedy and Martin MacDonald denied any involvement and an out of court settlement was reached.

Monday’s judgement comes at a time when workers at Buccament Bay Resort have resorted to striking for the third time this year in an attempt to force the cash-strapped company to pay their wages and salaries.

They say they have not been paid for two months.