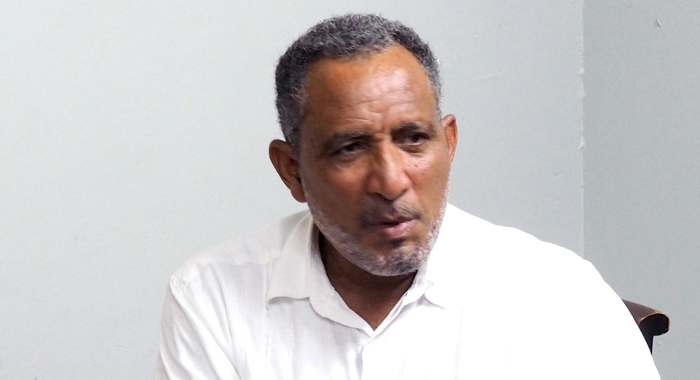 Recently elected Leader of the Opposition, Godwin Friday, has defended the process through which his colleagues elected him to lead them in Parliament, saying it was open, transparent, democratic and fair to all concerned.

His comments came in a Facebook Live interview with iWitness News on Tuesday, his first interview with the news media since taking up the post late November.

Friday, who has been Member of Parliament for the Northern Grenadines since 2001, noted that the position of opposition leader is a constitutional one.

He further pointed out that the Governor General appoints as Opposition Leader the person who commands majority support among elected Members of Parliament who do not support the government.

“That was done in a very open and transparent process in the sense that the candidates were asked for their opinion, their choice as to whom they wish to represent them as the Leader of the opposition in Parliament. They indicated that and then they signed a letter and sent it to the Governor General, and, in accordance with that, the Governor General made the appointment, which I was happy to accept,” Friday told iWitness News.

Shortly after becoming opposition leader, Friday was, on Nov. 27, elected president of the New Democratic party (NDP) by acclamation, replacing MP for East Kingstown, Arnhim Eustace, who had earlier announced to the party that he was stepping down as party and opposition leader, after 16 years.

After the leadership transition in the NDP, MP for Central Kingstown, St. Clair Leacock, who remains an NDP vice-president, accused the party of mismanaging the process of selecting the Opposition Leader, saying that he took a principled position not to participate.

When pressed on this, Friday told iWitness News: “You would have to ask him for a better explanation as to what he considers. I know he has made certain points about that.”

“From my point of view, I have always said that the process must be open and fair. Most importantly, not fair because of the particular individuals involved because what I want to see at the end of the process is that the person who is selected is the best person to represent the New Democratic Party and the person who has the broadest mandate from the party and the country as a whole,” Friday said.

He told iWitness News that there is no advantage to short-circuiting that process. “Because, for me, it is not a matter of me saying that I have to be leader of the New Democratic Party or leader of the country.”

Leacock had also complained about the manner in which ballots were distributed at the extraordinary convention at which Friday became leader after Leacock quit the race at the last moment.

Reports are that the ballots were presented to delegates before Leacock and Friday made their presentations to delegates and some of the delegates proceeded to vote before the speeches were given.

“But that affected both parties equally, so the point is you are asking me if the process was fair and open. I had no control over the process and I made that very clear because as a person who had an interest in the outcome because I was a candidate, I didn’t want to be involved in determining what size ballot to use, when to hand out the ballot and so on. I left that entirely to the party. The secretariat and to the chairman of the party and whomever was assisting in the organising of the convention.”

Friday said he took his cue from the convention organiser and made his speech when called upon to do so.

“And that was true for both candidates,” Friday told iWitness.

Asked what he plans to do to ensure that the NDP stays together in light of the apparent rift, Friday told iWitness News, “Well, what I have been doing now, which is to, first of all, as the leader of the party, to reiterate my commitment to service, then to encourage my colleagues to do the same in their own constituencies and then to bring that to the New Democratic Party.

“Again, it is consistent with the approach of focusing on the people.”

He said that he and Leacock have a “very cordial” relationship, something that Leacock has also said publicly.

“And any effort I can make to bring the situation which we have now, which you have said, it is something that is out there in the public – to bring it to a happy and speedy conclusion.”

One reply on “New opposition leader defends his appointment”