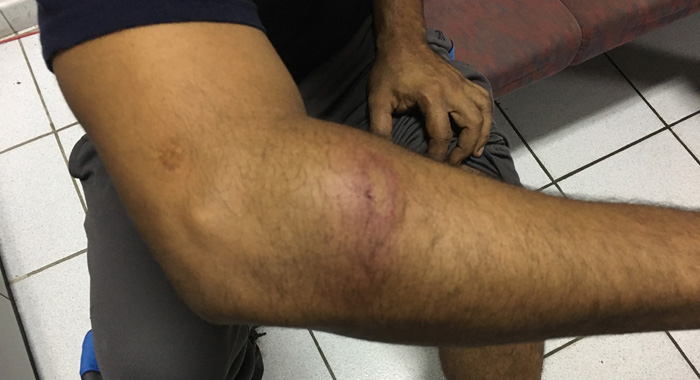 Pablo Malave shows iWitness News and injury to his arm inflicted when he was reportedly beaten. (IWN photo)

The impasse over the non-payment of wages at St. Vincent Shipyard Ltd. (SSL) reportedly turned to blows on Thursday as workers demanded two fortnight’s pay ahead of the Christmas holidays, even as the management said it could only afford to pay one fortnight’s wages.

Daniel Ravotti, chairman of SSL, told iWitness News that Pablo Malave, a Venezuelan worker at the facility, which was formerly known as the Ottley Hall Marina and Shipyard, was beaten by two of his Vincentian counterparts.

But the Vincentian workers, speaking to iWitness News separately, denied that any of them had hit Malave.

They said that he might have fallen and injured himself on the staircase.

Ravotti told iWitness News that the Criminal Investigations Department (CID) of the Police Force responded to the report of violence at the facility that was leased to him in July 2015.

He said they have told police the names of the two persons who reportedly beat Malave.

“They are not suspect, man. We see them. We see them doing what they were doing. So, from suspicion to a fact is different,” Ravotti told iWitness News.

The alleged beating took place on a day when workers at the shipyard placed the grill over a gutter at the entrance and exit of the marina upright, thereby preventing vehicular traffic from entering or leaving the compound.

They said that they would not allow Ravotti — who they said had not come to the marina for six weeks — to leave until they are paid at least two fortnight’s wages.

They workers said they had not been paid Ravotti told iWitness News that he was concerned about his safety.

“I mean, come on. The fretting and the coercion, these two things, regardless of how … angry you are, how frustrated you are, are not things that should be part of regular behaviour. Violence in unacceptable, it’s not to be tolerated because violence is never the answer,” he said.

“Violence is the tool for the people who do not have the right. So, if you’re [be]coming violence in such a way, you have to check yourself and say ‘What I’m actually doing?’ because you cannot smash property that is not yours, you cannot damage or assault people,” Ravotti said.

In addition to detectives from the CID and Rapid Response Unit, officers from the Special Branch, the intelligence arm of the Police Force, were at the marina on Thursday.