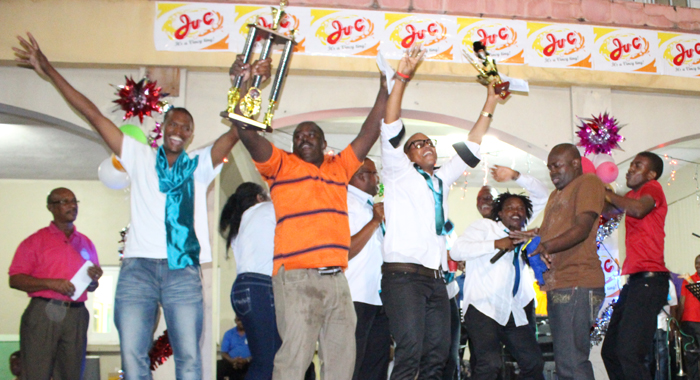 Western Division are the defending Champs.

The Western Division of the Royal St. Vincent and the Grenadines Police Force has maintained their unbeaten record as champions of the Police Cooperative Credit Union Police Caroling.

“Four in a row! Four in a row!” the excited group chanted after being crowned champions at the event, which took place at the Central Police Station last Friday night.

The Western Division, headed by Assistant Superintendent of Police, Enville Williams, copped the title with the songs “The First Noel” and “It’s Christmas”. They won the title in 2012, 2013, 2014 and now 2016.

Newcomers to the contest, SVG Teachers Co-operative Credit Union, almost clinched the title, but were outdone by Western Division, and had to settle for second position this time around. They sang “Oh Holy Night” and “It’s Christmas Again”.

Third position went to the Cadets, who sang “Drummer Boy” and “Christmas Trouble”.

The award for best speech went to Western Division as well as Best Traditional and Best Original Song. The award for Best Turnout group went to the Criminal Investigations Department.

The Central Police Station yard was a hive of activity with persons from all walks of life in attendance.