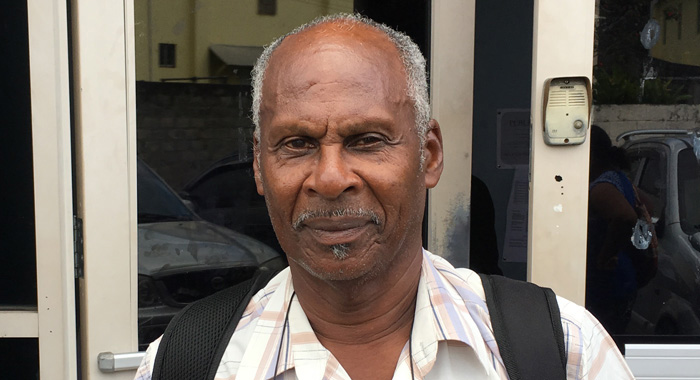 A Canouan man began his 76th birthday and 49th wedding anniversary on Friday in police custody and later appeared in court charged with trespassing, as the years-old beach access impasse in Canouan continues.

Andrew Foyle appeared at the Kingstown Magistrate’s Court on Friday, charged that on Jan. 5, 2017, he “did enter upon the property of Canouan Resort Development Limited as a trespasser with intent to annoy”.

It was the first time in this life that he was ever charged with a criminal offence.

Foyle is jointly charged with long-standing Canouan activist, Terry Bynoe, who has been campaigning for almost two decades for access to beaches in the southern Grenadines island, where residents say they are made to feel like second-class citizens as they are not being allowed access by land to beaches in the north of the island, where tourism developments are located.

Both men pleaded not guilty and were granted EC$2,000 bail with one surety.

The matter was transferred to the Union Island Magistrate’s Court for hearing on Jan. 20.

Lawyer Jomo Thomas, who is representing Foyle, told iWitness News outside the court in Kingstown that he is confident that his client would be found not guilty of the charge.

Foyle was born in Canouan and retired to the island a few years ago after working overseas for decades.

He has been involved the beach-access activism since last year, when developers first placed buoys in the sea, preventing vessels and swimmers from entering.

Head of the Maritime Administration, David Robin, later visited the island and announced that the government had declared a no-anchoring or fishing zone in an area near the resort.

The developers were also ordered to remove the buoys.

By Foyle said that the buoys were placed in the water again this year and activists on the island went and spoke to the manager of the resort about the buoy and access to the beach.

“He grant[ed] us access to the beach. Now, when they put the buoys back, we told him that we did not want it there and we gave him some alternatives as to how to put the buoy and he ignored it. So we took it down. And now they put it back the same way how it was again and that is not right. We were arrested yesterday on the beach in L’Anse Guyac and last night we travelled to come up here.”

The men were transported to Kingstown on a Coast Guard rigid-hulled inflatable boat.

“My back nearly killed me because I suffer with my back and it was a lot of pounding he said,” Foyle told iWitness News.

He said that the charge against him is “nonsense”, adding that he will continue in the activism for beach access.

“But the judge said that we can’t talk to any witnesses,” he said, noting the bail bond condition, but pointed out that he did not know if there were any witnesses or who they are.

“But all what we know when we were in the station yesterday, about six to seven guards came down there to give statements.”

Foyle described the charge as “trumped up”.

“It’s up to them. We are going to have access to the beach whether by hook or by crook. If Gonsalves don’t want to do it for us, which we have a right, because the road was there since I was a little child and now I am 76 years old and the road is still there. Only that they did it wider. They made it for vehicles. We didn’t have vehicles in the days and we were going all up there and so we need it,” Foyle told iWitness News.

18 replies on “Man, 76, charged on his birthday as beach access impasse continues in Canouan”