As activists are charged, lawyer wants PM ‘to put an end to’ Canouan beach impasse 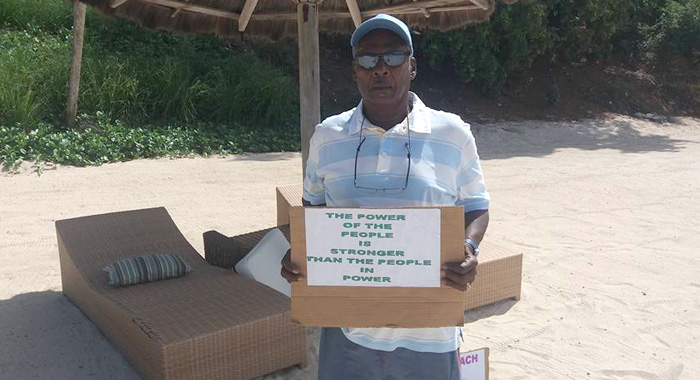 The lawyer for one of the two men charged with trespassing in connection with their activism to secure access by land to beaches in the north of Canouan, wants Prime Minister Ralph Gonsalves to intervene.

“I call on the Prime Minister right now to end this charade,” Kay Bacchus-Baptiste said outside the Kingstown Magistrate’s Court on Friday.

Bacchus-Baptiste is representing Terry Bynoe, who, along with Andrew Foyle, both of Canouan, has been charged that on Thursday, Jan. 5, they “did enter upon the property of Canouan Resort Development Limited as a trespasser with intent to annoy”.

“When it suited his purpose, he was with the same Terry Bynoe demonstrating for this same issue. This is fifteen years hence and it is time to end this charade,” Bacchus-Baptiste said.

While in opposition, Gonsalves, who came to office in March 2001, had supported Bynoe and other Canouan residents in their efforts to secure, under the New Democratic Party administration, access to the island’s beaches.

Access to beaches in the “developed” north of Canouan, where resorts are located, remains an issue.

Developers say there is unfettered access by sea and that they can facilitate transportation by land, via golf carts, if notified in advance of residents’ wishes to go to the beaches. Residents say they should be able to walk to the beach if they wish, saying this was always an option before the resort was constructed.

On Friday after the men pleaded not guilty to the charges and were each granted EC$2,000 bail, Bacchus Baptiste further said:

“It cannot be a threat for black people, in their own country, to be walking along a road to gain access to a beach. Where I this mentality coming from? It is a time to put an end to this. I do not understand these charges. I call upon the DPP (Director of Public Prosecution) to do the right thing and nolle prosequi — it is a popular word, where he is concerned, nolle prosequi these charges,” she said in reference to chief prosecutor, Colin Williams.

Asked what she thinks of her client’s chances in front of a magistrate, Bacchus Baptiste told iWitness News:

“Well it seems to me that they are opening up themselves to false arrest, false imprisonment, malicious prosecution. That is what it seems to me.”

Foyle told iWitness News that he was arrested on L’anse Guyac, one of the beaches where the resort is located in the north of Canouan.

Bacchus-Baptiste, who arrived at the court after the proceedings ended, noted that she had just come into the matter.

But she questioned the prosecution’s ability to prove the charge against the men.

“How are they going to prove this? My information is that he was simply walking on the public path, highway to the beach. How can that annoy? How can that annoy the hoteliers? What are they saying? What is the mentality?” she said, referring specifically to Bynoe.

Bynoe is also charged that he did unlawfully disobey a court order, suit number 507 of 2000 of the Eastern Caribbean Supreme Court.

Bacchus-Baptiste said she did not know what that charge was about, but added that it sounds “very non-specific” to her.

“But I have a feeling that that is a defunct matter,” she said.

She also commented on the fact that the men were transported from Canouan to Kingstown on a Coast Guard patrol vessel sometime between 1 a.m. and 2 a.m. Friday.

“What is the fear? What is so important to bring him up in the dead of night on the Bequia Channel? What is the fear? Who is calling the shots here? Who is behind all of this? And I am, again, calling on the prime minister to step in; put an end to this nonsense; it is enough.”

In court, lawyer Bayliss Frederick filled in for Bacchus-Baptiste.

He told the court that the nature of the defence is a matter that requires addressing by the High Court.

He said one of the charges against Bynoe relates to a civil matter, case 509 of 2000, which that is before the High Court.

Frederick said that the defence required a full examination of what that concerned and whether there was, in fact, a protest or criminal trespass on Thursday.

He said that matter is one that the magistrate court cannot address because it touches on fundamental rights and a constitutional matter.

Jomo Thomas, who is representing Foyle, however, said that he did not share Frederick view that the matter must be resolved before the high court.

The next hearing in the matter is at the Union Island Magistrate’s Court on Jan. 20.

2 replies on “As activists are charged, lawyer wants PM ‘to put an end to’ Canouan beach impasse”