Opposition says Argyle Airport shouldn’t be PR for any party 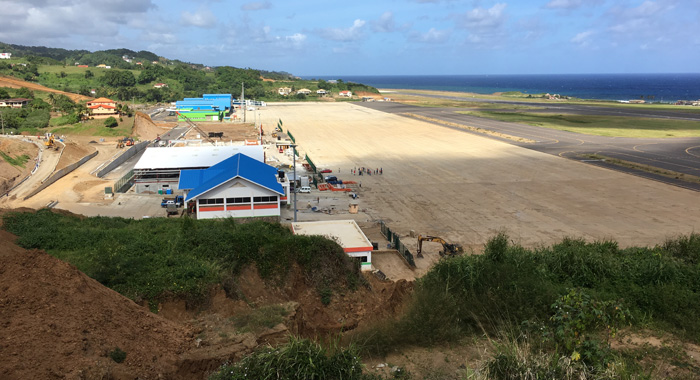 Leader of the Opposition, Godwin Friday, says it is important that the Argyle International Airport not be used as public relations for any party or government.

His comments on Friday come as the Ralph Gonsalves administration prepares to open on Feb. 14 with two international charters, the EC$729 million airport, which is six years behind schedule.

“I’ve heard many comments about this, people have been sceptical about it happening, about the terms under which it is happening, …but we, in the New Democratic Party, we have always said that what is key about this project is that it be done properly, in a fiscally responsible way; that those who are charged with and have the technical capability to do the work [do it], that it is done in a responsible and technically sound way as well, and that when it functions, it functions for the benefit of the country, not as a PR  for any political party or a government,” Friday said Friday on his New Democratic Party’s (NDP) daily radio programme on Nice Radio, on which he makes a weekly appearance.

“It has to deliver what it promised for the country,” he said of the airport, a deeply divisive project on which many persons come down strictly on partisan lines.

“And, having spent close to a billion dollars on it, it is my hope that that happens, because St. Vincent and the Grenadines cannot afford for such a massive project that has plunged us into so much debt, to not perform in a way that generates economic growth and greater economic opportunity in this country. We simply cannot afford that.”

Friday said he wants people to understand that the airport is not just an object to be looked at.

“It is not like a painting on a wall, when you are finished painting you hang it up and you admire it. There is a function that it has to perform,” he told listeners.

Friday also took objection in his view of the Ralph Gonsalves’ Unity Labour Party (ULP) administration’s approach to the project.

He said that one of the problems with the project “has been the manner in which the government has been promoting it, almost as a ULP rather than a government project”.

He noted that in 2015, three days before the general election, the government landed a chartered LIAT flight at the airport “in what appears, to any objective observer, a campaign device to try and show people that the airport is somehow completed and you have a LIAT flight coming into it”.

He said the event was “a sea of red all around, quite clearly demonstrating that it was a political activity rather than anything having to do with the technical and capability of the airport”.

The opposition leader said that one expects that LIAT would be able to land at the airport.

“LIAT lands at Arnos Vale all the time –well, except when the wind is a little bit high.”

He said the event on Feb. 14 is a continuation of what happened in December 2015, adding that in the past, the government has tried to demonise the NDP because it asked “responsible questions about the financing of the project and some of the technical aspects of the project.

Friday said it has turned out that most of the concerns that the NDP has raised “have actually come to pass, especially with relation to the financing. And, now we have significant debt in the country that has been generated by the project”.

He said that is why he is saying that for the good of the country, “we all hope and wish that this project could succeed beyond anybody’s expectations, but if it continues to be treated as a political rather than a major infrastructural project for the development of the country, and it is being treated as a political project, then, it will not perform in the way that it is intended and it will not meet the expectations of the masses of the people in this country”.

The airport will open on Feb. 14 without international certification and without any commitment by international carriers to make regular, scheduled landings there.