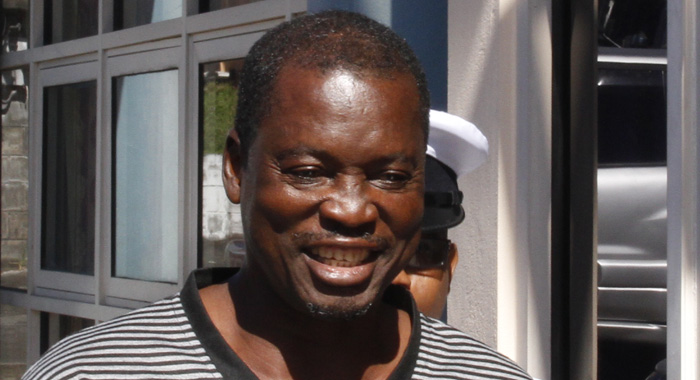 Kingsley Thomas escaped jail because he was able to come up with the EC$15,000. (iWN photo)

A man learnt an EC$15,000 lesson on Monday that he wants to share with everyone in St. Vincent and the Grenadines:

“I will like the whole of St. Vincent, whoever gets locked up and they say bail them, don’t take no chance to bail.”

The message came from Kingsley Thomas, a building contractor of Gomea, shortly after he paid an EC$15,000 fine and averted a six-month jail sentence.

Thomas had stood surety for his cousin, Rudolpho Alexander, who failed to attend court on Monday.

Alexander had been brought up on an April 2013 restricted ammunition charge.

However, when Alexander’s matter was called at the Serious Offences Court shortly after 9 a.m. on Monday, Thomas told Chief Magistrate Rechanne Browne-Matthias that the accused man was in prison overseas.

The magistrate then told Thomas that she hoped that he has EC$15,000 to pay to the court.

The surety said she had EC$7,000 and the magistrate instructed him to sit in the accused person’s area of the court, telling him that the police would assist him in placing a phone call if he needed to.

Thomas was able to come up with the full sum by the time the court adjourned for the day around 2:10 p.m.

Speaking to iWitness after he had paid the sum, Thomas said: “It ain’t easy to find money that yo’ nah have in your pocket to bail people.”

He said that while he had the money, it was to buy materials for one of his projects.