Guyanese charter airline to set up hub in St. Vincent 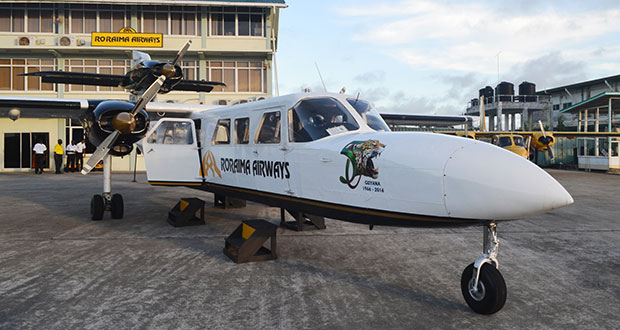 A Guyanese charter airline says it will expand its services into St. Vincent and set up a hub in the country when the Argyle International Airport begins operating.

The airport is scheduled to begin operating on Feb. 14, but Roraima Airways did not say when it plans to begin servicing the country when it made the announcement on its YouTube Channel on Wednesday.

It has a contract with Fed-Ex to fly cargo from Trinidad to Guyana three times a week and makes chartered flights to Caribbean countries.

iWitness News was told that the airline is considering introducing another type of aircraft.

Roraima Airways was established in November 1992 commencing its operations as a domestic airline doing charters in Guyana and the Caribbean with particular emphasis on executive clientele, the airline says on its website.

Over the years, the company has expanded its range of services into ten divisions, including, passengers or cargo air charters, travel agency, tours, hotels and restaurant and airline aviation security services.

In the YouTube video on Wednesday, the airline’s chief executive officer, Captain Gerald Gouveia announced the expansion of service to Argyle International Airport.

“Roraima is going to be expanding our operations into St. Vincent. St. Vincent just finished building a brand new, spanking, modern airport in the middle of the Caribbean Sea and we have always have had a good relationship with St. Vincent, the government of St. Vincent,” Gouveia said.

He said his son, who had gone on a flight to Antigua, would land in St. Vincent and would be meeting with Vincentian officials.

“Because we really want to give effect to this whole concept of CARICOM and working together,” Gouveia said.

The EC$629 million Argyle International Airport, will begin operations on Feb. 14, six years behind scheduled with a chartered flight from Canada and New York, respectively, and scheduled LIAT flights.

5 replies on “Guyanese charter airline to set up hub in St. Vincent”