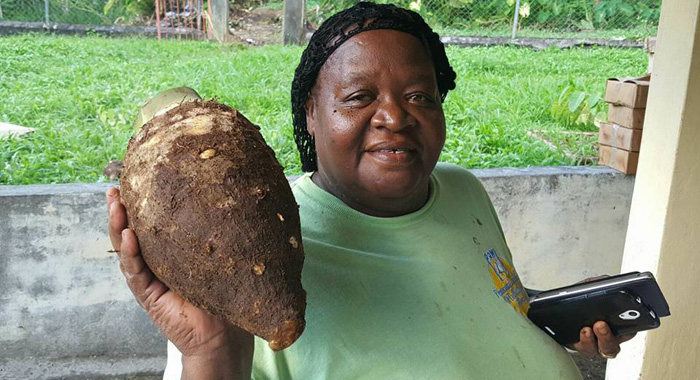 The second shipment of agricultural produce to be ferried from St. Vincent and the Grenadines to Trinidad and Tobago under a regional initiative will leave Kingstown this weekend.

The shipment is part of an Organisation of Eastern Caribbean State (OECS) initiative in which Kingstown would pilot the initiative and provide a template for the rest of the region, Minister of Agriculture Saboto Caesar said on Tuesday, according to content sent to the media by the Ministry of Agriculture’s communications unit.

His comments were made at the Ministry of Agriculture Wednesday afternoon, the communication unit told iWitness News on Thursday.

The unit said that while the event had been planned the time of arrival of the overseas-based speakers was not confirmed and therefore the media was not invited to ask questions.

Speaking at the event, Caesar said that the government of SVG in 2014 advanced the Agri-Export Strategy Initiative to be implemented throughout the country, with local, regional, and international implications.

Central to the initiative was the reduction of the food import bill through a systematic process in which import substitution was to play a very critical part.

The initiative is also part of efforts to increase exports to traditional regional markets in Trinidad and Tobago and Barbados.

Caesar said that that an historical issue confronted them: price volatility on the Trinidad and Tobago market.

“Many farmers will complain that sometimes you can get 30 cents for a pound of dasheen going to Trinidad, sometimes, you could get right up to one dollar or, sometimes, even more,” he said.

It became problematic for farmers in their planning and execution of their businesses, the agriculture minister said, even as he noted that Vincentians farmers have received significant benefits from their trade in the region.

“But very important to the Agri-Export Strategy initiative was the establishment, the quest to establish, an intra-regional trade platform in the OECS to reduce the OECS’ food import bill, which falls in line with many of the principles and precepts of the revised Treaty of Basseterre.”

The Eastern Caribbean Trading and Agriculture Development Organisation (ECTAD), the registered Secretariat of the Caribbean Farmers Network (CaFAN), sent the first shipment of produce to Trinidad in late December.

Oliver Seraphin, representative of Global Shipping, said that another shipment will take place this weekend.

“And it is expected that we will be doing that weekly,” he said.

Another player in the initiative is Bunny Imports and Exports Ltd. (BIEL), one of the largest distributors of fresh fruits and vegetables in the Caribbean region.

Also, in Barbados, cabbage imported from outside the region attracts a 140 per cent tax.

“So we have a 140 per cent advantage over those that’s coming from extra-regional sources in the area of cabbage,” Seraphin said.

Jai Rampersad, representative of (BIEL) said his company typically imports over 500 containers a year and their recent drive has been to reduce the region’s food import bill.

He said this was discussed as the Caribbean Pacific Agri-food Forum in Barbados in 2015 and Caribbean Week of Agriculture in the Cayman Islands last year.

“The time is now to get it done,” Rampersad said.

“We want to start and we have started the intraregional trade. We have to provide that market for the farmers, that impetus from the private sector,” he said.