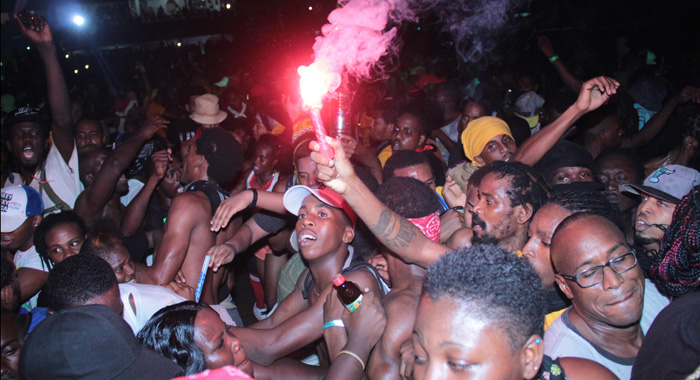 Soca Monarch is hugely popular with revelers, but CDC says the current format is unfair to everyone else, including the competitors. (iWN file photo)

Vincy Mas 2017 will see the introduction of a Soca Monarch semi-final.

The finalists will be chosen through this show, rather than judges listening to an artiste’s music recorded on a CD.

Chair of the Carnival Development Corporation (CDC), Ricardo Adams told iWitness News on Tuesday that the semi-finals will be a picnic-style event, held outside of Victoria Park.

He said a number of persons have had an issue with the judging of the soca monarch based on the submission of CDs.

“Therefore, you might have somebody who might not have as good a CD but is an excellent performer, has a very good song, but doesn’t necessarily have the opportunity to make it to Victoria Park finals,” Adams told iWitness News in Kingstown at the media launch of Vincy Mas 2017, which will also see the shelving of the regional pageant, Miss Carival this year.

He said the soca semi-finals would provide an opportunity “to expose more artistes, more of the young and upcoming artistes, who can then come in and make their mark, improve their craft and be able to stand a chance to compete, because performance will then also count, apart from the song on a CD”.

Adams said the CDC is yet to work out the logistics about the number of finalists, but told iWitness News, “Realistically, we cannot have a show that goes 10 hours long.”

The Soca Monarch show, which is usually scheduled to begin at 9 p.m. often ends at dawn the following day, after the Ragga and Power Soca segment.

Adams told iWitness News that soca lovers might love such a show, but added that one of the main issues might not even be the additional cost of a show of such a length.

He said such a situation is also unattractive to patrons who might watch the show at Victoria Park but might not want to participate in the revelry as well as those paying to watch it at home.