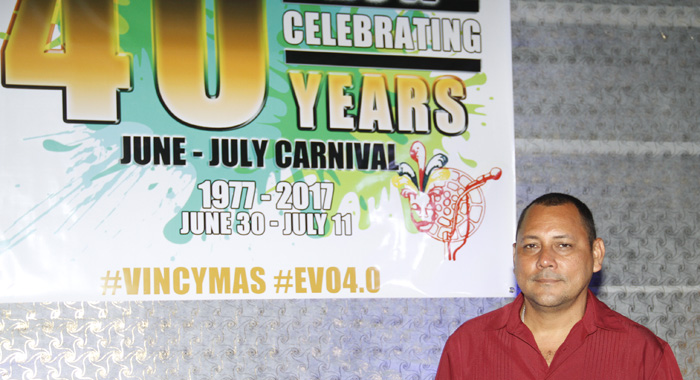 The CDC will hold four events to recognise each of the four decades of post-Lenten Vincy Mas, with the final one being a grand show dubbed “Evolution 40” on July 7.

The first event will be held on Feb. 18 on the Leeward side of St. Vincent but the exact venue will be released at a later date, Dennis Ambrose, Special Advisor to CDC (40th Anniversary Celebrations) said at the media launch of Vincy Mas 2017 in Kingstown on Tuesday.

For the First Decade, (1977 – 1987) the CDC intends to take persons back-in-time to an event called the All Star Show, which was pioneered by Granville Straker.

On this occasion, the CDC will showcase as many of the artistes whose music and performances made an indelible impression on the Carnival culture at that time, Ambrose said.

For the second decade (1987 – 1997), the footprint for this period was the “Clash of the Bands”, which was pioneered by the late Glen Jackson, a period that saw the coming of age of bands such as Touch, Blacksand, Exodus.

Steelband will be a major feature of this event, which will take place on March 18 at a Venue to be announced on the Windward side of St. Vincent.

To mark the Third Decade (1997 – 2007), the CDC will team-up with the Union Island Easterval organisers to have a “mammoth event intertwined with the activities of the Grand Easterval programme”.

The fourth decade will be at Victoria Park for the launch of Vincy Mas on May 6.

Chair of the CDC spoke to iWitness News at the media launch about the nature of the events.

He illustrated by saying that the all stars show, for example, will also incorporate aspects of pan and mas.

“So, when we get to the EVO4.0, it would basically incorporate our calypso culture, our pan culture, our mas culture, our soca culture. And bring, hopefully, together, a calalloo of what has been the best of the 40 years of Vincy Mas in a birthday party style,” he told iWitness News.