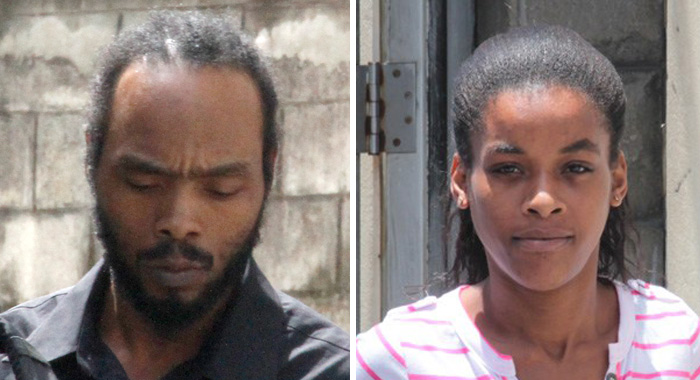 Randy Shallow, left, and Freikesha Douglas are being tried in connection with the guns and ammunition. (iWN photos)

A Lowmans Hill man and his girlfriend have been charged with eight counts of gun and ammunition possession in connection with the cache of guns and ammunition that police found in that West Kingstown community on Wednesday.

Randy Shallow and Freikesha Douglas pleaded not guilty and were each granted bail in the sum of EC$45,000 when they appeared before Chief Magistrate Rechanne Browne-Matthias at the Serious Offences Court on Friday.

Senior Prosecutor Adolphus Delpleshce did not object to bail but asked the chief magistrate for sufficient surety and that the accused surrender all their travel documents, including national ID cards and drivers licences, to the court and that permission be obtained from the court before the defendants are allowed to leave the country.

He also asked that the defendants be ordered to report to police three times a week and that stop notices be placed at all ports of entry and exit in St. Vincent and the Grenadines.

Delplesche also asked the court to grant sufficient time for the files to be properly prepared and perused before the next hearing.

The magistrate granted the prosecution’s wishes and ordered that the accused report to the Questelles Police Station three times a week.

The next hearing in the matter is Jan. 26.

No one had come to sign the bail bonds by the time the court adjourned around 10:15 a.m.