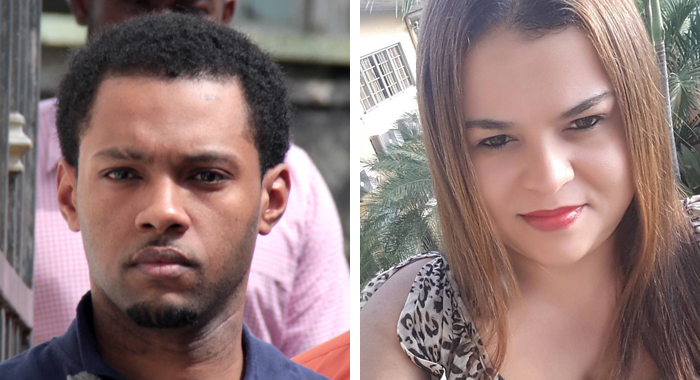 Veron Primus, left, has been charged with the November 2015 murder of Sharleen Greaves, right.

The preliminary inquiry in the November 2015 murder of real estate agent Sharleen Greaves, 33, is expected to hit the homestretch when hearing recommences at the Serious Offences court next Tuesday.

Senior Prosecutor Adolphus Delplesche asked for an adjournment on Tuesday after the court heard testimony from three detectives, including the lead investigator, who took the stand for more than two hours.

Vermont resident Veron Primus, 29, is charged with the murder of Greaves, whose body was found in her office at Bijou Real Estate on Nov. 13, 2015 with multiple stab wounds.

The office was located in the Highway Trading Building along the main Windward Highway in Arnos Vale.

One of the police officers who testified on Tuesday was Detective Corporal Mark Wyllie, who was among detectives dispatched at 11:35 p.m. on Nov. 12 to the vicinity of the Highway Trading Building, after police control received a telephone report.

Wyllie told the court that he and other detectives made several inquiries and, based on the information they received, went to Villa to conduct further investigation.

They returned to the Highway Trading Building, carried out further investigations and later returned to base.

One of Greaves’ employees would find her body in her office around 9:55 a.m. the following morning.

Also testifying on Tuesday was detective Sergeant Desreen Daize, who was stationed at the Barrouallie Police Station on April 16, 2016 when she was dispatched to the Vermont Police Station to assist her colleagues there with an investigation.

Police in Vermont had Primus in custody in relation to a report that he had allegedly kidnapped and held fellow villager 24-year-old Mewanah Hadaway in the basement of his home from Jan. 1, 2016, to about April 15 that year.

Primus has been slapped with a number of charges in connection with that allegation. Those trials are taking place before the Family Court.

Daize told Tuesday’s court hearing at the Serious Offences Court that she, along with other police personnel, and Primus and Hadaway visited Primus’ home in Vermont as part of her investigation.

Based on certain discoveries there, she cautioned Primus and handed over a number of items and relayed certain information to her colleagues at the Major Crime Unit, an arm of the police force that investigates serious crimes, including homicides.

On April 19, 2016, detective Constable Edmond Ollivierre, the lead investigator in the Greaves murder case, took Primus, along with Primus’ then lawyers, Michaela Ambrose and Maurice Findlay, other police personnel and a representative of GECCU to the credit union’s car park in Arnos Vale, where they conducted a test on a vehicle owned by Greaves.

Based on the outcome of the test, Ollivierre informed Primus that he would like to conduct an electronic interview with him.

The detective told the court that the interview began about 2 p.m. on April 20, 2016 in the presence of Primus’ lawyer. But about 10 minutes into the interview, Primus stopped the interview saying he would like to consult with his lawyers in private.

Ollivierre told the court that police allowed Primus to do so.

About 3 p.m. that same day, a second interview was conducted in the presence of Primus’ lawyers. This lasted about 56 minutes.

Ollivierre told the court that Primus later asked for his uncle, Leviticus Primus, a former sergeant of police, and asked that a third interview be conducted with him in the presence of his uncle, but without his lawyers present.

The detective told the court that the interview began around 7 a.m. on April 21 and ended at 8:56 a.m. He said that Primus was not threatened, beaten or promised anything before, during of after the three interviews.

Ollivierre told the court that at 1 p.m. on April 21, 2016, he arrested Primus and charged him with Greaves’ murder.

Primus is representing himself in the preliminary inquiry.

The accused man’s lawyers have withdrawn from the case, citing case management difference with their client.

The banter between the accused man and the prosecutor continued on Tuesday, with Delplesche, while rising to explain to Primus an element of the law, said he was giving his advice “softly” on that occasion.

But the senior prosecutor was more robust in his caution to Primus as the accused man, during cross-examination of Daize, asked if she had gone back to his home another time after she went there with him and other personnel during her investigation.

The detective said that she had, adding that the visit, however, was unrelated to the matter before the court.

Delplesche warned Primus to thread carefully, saying that he would allow the accused man to prejudice the proceedings.

Later on in the hearing, Delplesche stood to offer “free legal advice” to Primus, reminding him that the purpose of a preliminary inquiry is to see if the prosecution has enough evidence to send a case to a judge and jury for trial and not to test the quality of that evidence.

The exchange came as Primus asked the lead detective the purpose of an image submitted as part of the evidence.

The Chief Magistrate, Rechanne Browne-Matthias told the defendant that while she understands what he might be getting, he has to ask the questions that might bring out from the witness the information that he would like to have on the record.

But Primus proceeded to present an explanation to the court.

Delplesche rose and objected, saying that cross-examination was for questions to and answers from the witness and not for the accused or prosecution to present arguments to the bench.

“The purpose of a P.I. is to see if there is sufficient evidence that a prima facie case is made out. Prima facie, it is a Latin term [meaning ‘based on the first impression; accepted as correct until proved otherwise’]. I don’t know where he learnt his law. I know where I learnt mine,” Delplesche told the court.

Browne-Matthias told Primus that a prima facie case is not beyond reasonable doubt, adding that her decision would not be based on the evidence of one person, but the evidence in totality.

She told Primus that “when” he goes before the High he will have a chance to address those.

“When I go before the High Court,” Primus scolded, noting that the magistrate had said “when”, rather than “if”.

“If there is sufficient evidence, you would be committed. If there isn’t you will be discharged,” she said.

In asking for the adjournment, Delplesche told the court that he is coming to the end of the proceedings, but needed some time to file an application under the Witness Special Measures Act.

He said he would not, however, be requesting full anonymity for that witness, who is expected to testify after the last remaining witnesses take the stand.

After the adjournment was announced, Primus noted that Delplesche had in an earlier court hearing referred to a section of the Criminal Procedure Code, adding that he does not have access to legal material in prison, where he is on remanded, pending the outcome of the proceedings.

Primus was referring to Section 35(3), which Delplesche read for him:

“If, upon a person being taken into custody, it appears to the police officer that the inquiries into the case cannot be completed forthwith, he may release such person on his entering a bond, with or without sureties, to appear at such police station and at such times named in the bond, unless he receives prior notice in writing from the office in charge of that police station that his attendance is not required.”

“You don’t have to pay for that,” Delplesche joked.

“Thank you,” Primus said as Delplesche ordered the court to rise.

Among the persons who have testified in the preliminary inquiry is Greaves’ mother, Inether Bailey-Holder, who has come to the court precincts every time the matter is called for hearing.

Bailey, who cannot sit inside the courtroom because she is a witness, sits outside and wait until the end on each occasion.

She often wears a white t-shirt emblazoned with a tribute to her daughter.

On Tuesday, she descended the steps after court orderlies had escorted a handcuffed Primus down the stairs and into a waiting vehicle.

The accused man looked Bailey in the face, looked at the Greaves’ photo on her t-shirt and wiped his nose with his index finger as he looked away.