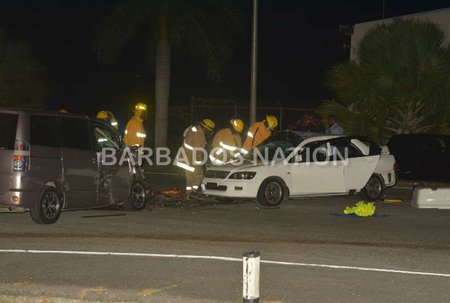 Three Vincentian college students were among four persons who died in an early morning vehicular accident in Barbados on Sunday.

Barbadian media reports say the three Vincentians females, ages 17, 18 and 19 years old, were interns at a hotel in that country.

The three, along with the Barbadian male driver, died as a result of the crash, which also involved a van.

It occurred around 3 a.m. on Sunday at Graeme Hall, Christ Church.

iWitness News was able to confirm that the Vincentians were students at the Technical Division of the St. Vincent and the Grenadines Community College.

Barbadian police or officials in St. Vincent and the Grenadines have not released the names of the students.
Reports are that the students were scheduled to return home later on Sunday.

Three persons who were in the van were taken to hospital.

The deaths bring to four the number of SVGCC students who have succumbed to injuries sustained in motor vehicular accidents over the past month.

Onixcy Hamilton, a 19-year-old student of Troumaca, died on Dec. 31, 2016, when the car he was driving crashed in Chateaubelair.

His schoolmate, Carlos Harry-Wyllie, who was a passenger in the car, survived.

One reply on “3 Vincentian students die in Barbados car crash”