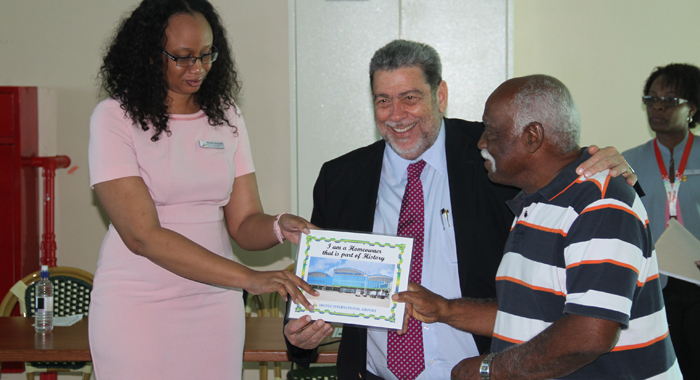 The government on Wednesday presented certificates of appreciation to former property owners at Argyle who were relocated for the construction of the international airport there.

“I want to say thanks,” Prime Minister Ralph Gonsalves told the gathering at the Departure Lounge of the airport, which will begin operating on Tuesday.

The prime minister told the former property owners that when his government conceived of the project in 2005, one of the big issues they had to address was dealing with the 134 middle and upper income houses, eight businesses and several parcels of vacant land at Argyle.

He said that the first thing the government had to do was to get the property owners to appreciate what the project was going to be about and to ask for their cooperation.

There were political risks because he made the speech on Aug. 8, 2005, laying out the plan to build the international airport and an election was due later that year, Gonsalves pointed out.

“I cudda (could have) fall flat on me face if you, the homeowners, had said, ‘Ralph, go to hell!’”

He noted that two town hall meetings were held with the property owners and that there were “some difficult moments”.

One homeowner originally from Guyana and who is Vincentian by marriage, pointed out in one of the meetings that he had worked in England in the cold for years and asked Gonsalves to explain to him why he should move.

“I listened to him and I cudda take him on and quarrel with him. I said, if I were in your position, I wudda cuss me more than you cuss me. Because, what yo’ go do?”  Gonsalves said.

The prime minister told the gathering on Wednesday that he had to come back for a second meeting at which he felt a little better.

During the second meeting, property owners began to ask specific questions about who was going to value the land, where they would go, what incentives to move they were going to be given.

“Because I had laid down the principle that no homeowner would be put in a position less favourable than before,” Gonsalves said.

He said the property owners were happy to learn that an English firm was going to do the valuation.

The government also allowed owners of buildings to take out whatever they could have — such as the roof, windows, doors and fittings — before the built properties were demolished.

Further, the former property owners did not have to pay stamp duties on new parcels lands and when the government saw the values that the English firm gave the properties, it decided to increase them by 15 per cent to avoid “a riot in Argyle”.

“I know in the process there were complaints, but, the fact that all of you are here, I form the impression that you feel yourself part of this and that we haven’t let you down, that we have built a good thing, not just for you — because this isn’t just for you and me. This is for our children and our grandchildren and the future generations. This is what this is about,” Gonsalves told the property owners who attended Wednesday’s event.

He said he was hoping to bring back to St. Vincent for Tuesday’s opening 60 of the 220 Cubans who have worked on the airport.

Speaking at the event, Rudy Matthias, head of the International Airport Development Company (IADC), the state-owned firm that built the airport, said the faces of the former property owners reminded him of many gatherings they had between 2005 and 2007.

“It looks as though we are together again, but this time, we are all smiling. So I want to welcome you to your new airport. Welcome to the Argyle International Airport,” he said.

Matthias said there are many stories that can be told about what has happened over the years.

“And the story I am going to tell today is about your support of us and how we went through the process and how your support for what we have done has helped to make this possible.”

He said that in September 2005 — one month after Gonsalves outlined to the nation his plan to build the airport — he and another person started knocking on doors telling homeowners that they were going to be affected.

“Sometimes when we went to knock, people are inside and you could see them but they ain’t coming out; they ain’t moving…

“Sometimes, you had to go two, three times before you could find somebody to talk to,” Matthias said.

He said that with the general elections — which came in December 2005 — on the horizon and the opposition saying that the airport announcement was a political gimmick, some persons weren’t so keen to talk to IADC officials.

“But I had faith in this gentleman (Gonsalves) and I said I was going to help you do it. And when he said he is going to do something, I trusted him that he was going to do it. So, I went out brave and bold and knocked on the doors of the homeowners and I say, this time, we are going to build an airport.”

Matthias, however, said it took some convincing.

“You can reflect now. Back in 2005, it was hard to believe. In fact, at that time, less than 10 per cent of the country felt that it was possible. So, it was difficult for a homeowner who was going to be relocated to take this thing all in that all of a sudden, out of the clear blue, we are going to build and airport.”

He said that over the years, the government has bought 460 vacant parcels of land, 142 homes and has acquired 275 acres of land.

“So, compared with the 61 acres of land at E.T. Joshua, you can say this is a significantly bigger site than we have at E.T. Joshua.”

Matthias said that, in total, the government paid EC$137 million for the airport site.

“Because not one square foot of land here was owned by the government. So, every bit of land that we bought, we had to pay for it.”

He said there is just one homeowner who hasn’t been paid, because he and the government have been unable to agree on a price.

Argyle homeowner yet to be paid