SVG climbing up the down escalator — Friday 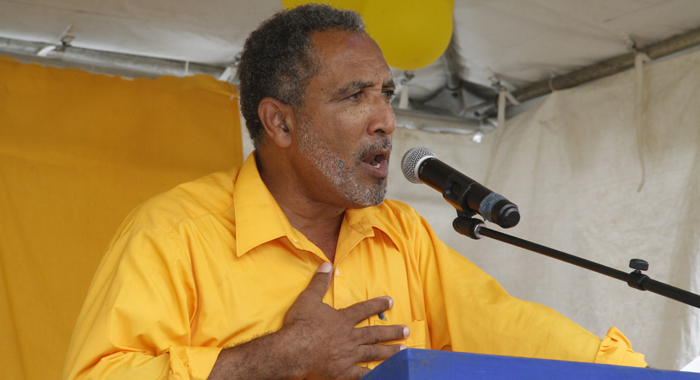 Leader of the main opposition New Democratic Party (NDP), Godwin Friday, says he is frustrated by what he says is little progress being made by St. Vincent and the Grenadines relative to tis regional neighbours.

He told the NDP’s 39th annual convention on Sunday that it frustrates him so much “to know that we are losing so much time, when our neighbours in Grenada and St. Lucia are moving forward and we seem to standing still.

“We are climbing up the down escalator here in St. Vincent and the Grenadines,” he told delegates and party supporters at the Layou Hard Court.

He urged party supporters to take seriously the “one Vincy” element of theme of the party’s 39th convention.

The convention was held under the theme: “Moving Forward Together, One Nation, One People, One Vincy”

Friday urged NDP supporters to continue to reach out to their neighbours regardless of their political sympathies.

He noted that then party chair, Linton Lewis, had said in his address earlier that everyone in St. Vincent and the Grenadines is needed to build the country.

“And when we say to our neighbours, no matter what colour shirt they’re wearing, we must mean it because political stripe should not divide us as if it is a matter of life or death. It is just a matter of determining how our country is governed and when we differ on ways to proceed, we should not differ on knowing that we all want to go in the same direction,” said Friday, who became NDP leader last November.

He said that in keeping with the theme of one Vincy, the party will go forth in meeting the people of the country to start a dialogue with them, “to bring them along, to let them know that we in the New Democratic Party value their input, that we value what they have to offer to this country and that we will help them to deliver for themselves and for a better life for the people of St. Vincent and the Grenadines.

Friday said that as leader of the NDP, he pledges that “at every waking moment I will not fail you, I will continue to look for solutions, but we must all do it together.

“All my colleagues here on the platform stand with you, all the people beyond this playing field here, we must mobilise to go forward because we can have a brighter day in St. Vincent and the Grenadines,” he said.

“Today my heart aches for my country. This government, while it stares apparently transfixed by the large infrastructural project called the Argyle International Airport, appears to have lost sight of the needs of the important sectors of the country’s economy.”

He said that in the EC$976 million budget that Parliament approved on Friday, there is “very little to nothing about help for farmers, the fishing industry and the tourism sector.

“Little or no interest was shown in the plight of the Buccament Bay Hotel workers who still have not been paid for their hard labour,” he said.

Friday noted that the national debt now stands at over EC$1.6 billion, adding that $400 million of this is debt incurred for the Argyle International Airport project.

“The debt now amounts to a worrying 82 per cent of GDP and the debt service payments are expected to amount to over EC$203 million in 2017. This means that there will be little money to be spent on providing services in schools, hospitals, fixing roads and promoting the all-important tourism industry,” Friday said.

He said the mantra seems to be that the airport — which opens on Tuesday — will solve all the nation’s economic problems.  “But any sensible person knows that it will not. In fact, the AIA is likely to compound our financial difficulties for some time to come,” Friday said.

2 replies on “SVG climbing up the down escalator — Friday”