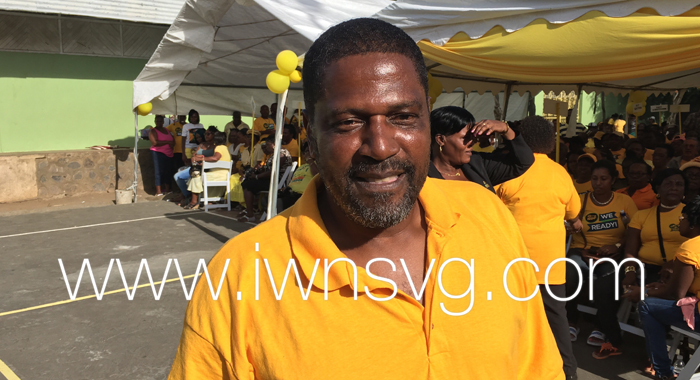 A retired Commandant of the St. Vincent and the Grenadines Coast Guard has been elected general secretary of the main opposition New Democratic Party (NDP).

James told iWitness News that he was “humbled” by the outcome adding that while he is a newcomer to politics, he plans to use his military training to take the NDP to victory.

“I feel humbled and privileged. This party has just elected an essentially unknown in politics. I have not been in politics for a long time. I have just gotten started and they have reposed their confidence in me and that is humbling,” James told iWitness News in a Facebook Live interview, shortly after his election.

James noted his managerial experience gained in his 34 years in law enforcement.

“Essentially, I believe that politics is the management of people and situations, crises and so on and I think that my background in terms of the Coast Guard has given me that experience to handle, I think, whatever should come up.”

Since retiring in 2013, James has been involved in farming and has been “taking it easy, relaxing with the family”.

He said that as a new person to politics, he would see things with new eyes.

“I will see situations differently. I will be able to bring my planning and co-ordination experience to bear, in terms of my co-ordination of the administration, [upon] the activities of the NDP.

“If I use a military analogy: if you have your forces out fighting, the logistics is what will make them survive in the field and I feel that I have the background and the experience to ensure that the forces, which are the candidates in the various constituencies, have the various logistical support to carry the battle forward.”

James comes to the NDP at a time when the party has lost four consecutive general elections, the last of which it is contending in court.

He told iWitness News that the thinks that the party, which was founded in 1975 and is the oldest in the country, “will go through a process of change, which has started today because, as you see, a number of young persons have been elected in positions.”

The new general secretary said that the NDP has to address its “internal arrangements”.

“Once that is done, then we can come out to the people. We can’t talk change unless we embrace it ourselves. So, we will embrace change and take it to the people because this country needs change.

“This country needs to move away from where it is presently and it is going downhill pretty fast. I see this country on a very steep slope down to nowhere. The present administration has a grasp around this country’s neck and it is stifling it.

“All we can see is increase in murders, poverty and these sorts of things. And I think that the NDP is the answer to these problems. However, the NDP itself has got to adjust itself, make the changes to come out and be the change for people in this country.”

Asked if what was displayed on Sunday was public relations, James said he did not think so.

Asked if he is confident that the NDP would win general elections if one were called suddenly, James said he was “more than confident”.

“We are going to start putting our house in order right now,” he said, adding that the party has a number of persons who are experienced in handling elections.

James told iWitness News that in the constituencies where candidates have not been announced, potential candidates have been identified but the formalities have to be completed.