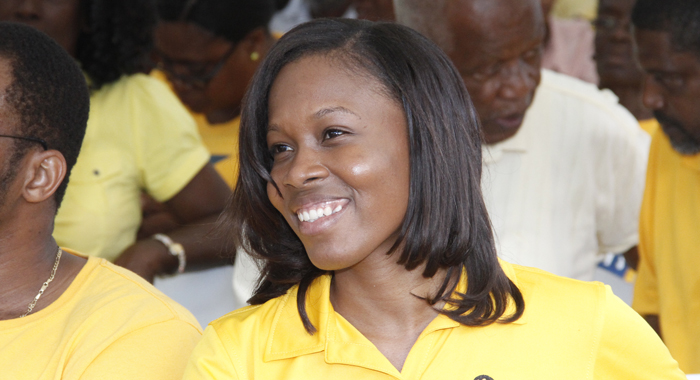 Two women registered decisive victories against their fellow male contenders to secure positions on the New Democratic Party executive, elected at the party’s 39th convention in Layou on Sunday.

London, who announced her candidacy just a few days before the convention, garnered 192 votes compared to Francois’ 59 and Adams’ 18.

Some party supporters felt that Adams should not have allowed himself to be nominated in light of a sex scandal in which he was alleged to have been involved last year.

Adams stepped down as New Times host last October after police arrested him as part of an investigation into a report of unlawful sexual intercourse with a minor.

He was later released without charge but announced that he was stepping down until the conclusion of the investigation.

Some NDP insiders have intimated that Adams should have also stepped down from the central committee of the NDP and also relinquish his post as chair of the party’s Central Kingstown division, which he continues hold.

The other woman to outperform her male challenger on Sunday was communications professional, Laverne King, who defeated layer Israel Bruce, 165 voted to 105, to become the NDP’s public relations officer.

However, Sen. Shirlan “Zita” Barnwell, a lawyer, had no such luck as she lost to her male contenders in her bid to become a vice-president of the NDP.

Bruce, who was also a nominee in that race, stood down just before it was put to a vote.

The NDP now has a new chairman: MP for West Kingstown, Daniel Cummings.

Cummings was elected unopposed, as the incumbent, former senator Linton Lewis, decided not to contest the position he held for 10 years.

The NDP also has a new general secretary.

Retired commandant of the Coast Guard, Tyrone James, wrested that position from Allan Cruickshank in a 164-87 result.

Former Health Minister, Burton Williams, who had been nominated as a candidate for general secretary, bowed out of the race just before a vote.

He said he would concentrate, instead, on documenting the history of the NDP.

Bernard Mills was re-elected, unopposed as the party’s treasurer.

The members elected on Sunday join NDP leader, Godwin Friday, who was elected at an extraordinary convention last November.