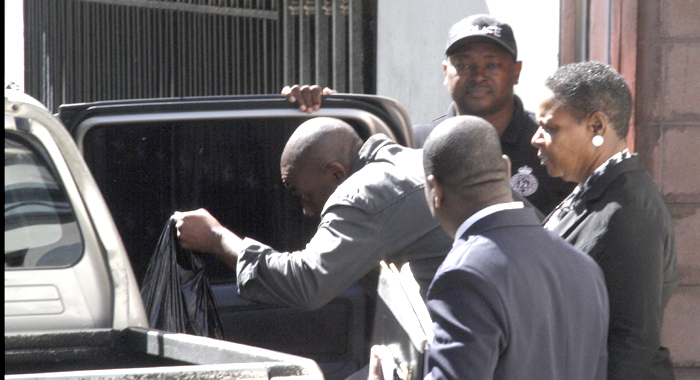 A man who appeared in a video some years ago saying that had he not changed his life he would have ended up like his father who was executed for murder, is likely to be slapped with a murder charge over the next few days.

Junior Jarvis is likely to be charged with murder in connection with the Valentine’s Day shooting death of Randy Lawrence at Arnos Vale.

The killing occurred four days after Jarvis, the holder of a licensed firearm, purchased the weapon that police believe was used in the shooting.

A source in the know told iWitness News that Jarvis was issued a firearm licence last year, but the single-parent father of five had had to save for some time to amass the money to buy the firearm.

Police say that Lawrence, a 39-year-old employee of Bank of St. Vincent and the Grenadines, died at the Milton Cato Memorial Hospital, where he was taken after being shot multiple times around 7 a.m. in Arnos Vale on the day dedicated to love in the Western world.

Sources say that the shooting may have been the culmination of an altercation surrounding a young woman, with whom Jarvis is said to have or have had an intimate relationship.

Police said on Wednesday that Jarvis — a 44-year-old marketer and former journalist — is assisting them with their investigations into the killing, the first homicide in St. Vincent and the Grenadines in 2017.

Lawrence’s death ended a six-week span in which there were no killings in St. Vincent and the Grenadines, after a year in which 40 became the record for homicides in the country within one year.

iWitness News understands that detectives are awaiting the outcome of an autopsy — which is expected to be conducted as soon as the pathologists return from overseas — before charging Jarvis with murder.

But Jarvis, a former senior reporter at Searchlight newspaper, is already facing some serious charges, said to be connected to the shooting death of Lawrence.

On Thursday, he was brought before Chief Magistrate Rechanne Browne-Matthias at the Serious Offences Court in Kingstown — where he was denied bail – in relation to three charges, including one count of attempted murder and aggravated burglary were read to him.

Jarvis is charged that on Feb. 14, 2017, at Arnos Vale,  “with intent to commit the offence of murder on Josette Smith of Arnos Vale, [he] did an act which is more than merely preparatory to the commission of the offence contrary to Section 315(1) of the Criminal Code”.

Prosecutor Station Sergeant of Police, Elgin Richards, objected to bail saying that the Crown believes that the defendant is a flight risk and there is a more serious charge expected to be brought against him.

But Jarvis’ lawyer, Israel Bruce, told the court that it can order that Jarvis surrender his travel documents and that stop orders be placed at all ports of entry and exit, adding that this would address the Crown’s concern.

The defence counsel said that while the prosecution said a more serious offence is coming, no timeline has been offered.

Richards told the court that police are conducting a murder investigation and if Jarvis is granted bail, he “certainly would interfere with the investigation”.

Bruce retorted that while the Crown had posited another basis for the objection, the prosecution still hadn’t answered the question regarding the timeline, if Jarvis is being investigated for a possible charge of murder.

The chief magistrate told both sides that the court doesn’t entertain application for objection to bail ad infinitum.

She also noted the Crown’s arguments to counter the application by the defence regarding surrendering travel documents, but adding that even with such an imposition “we know the nature of St. Vincent and the Grenadines” — an apparent reference to the nation’s porous borders.

She decided not to consider bail at the moment and will revisit it on Feb. 22.

iWitness News understands that Jarvis and Lawrence were involved in an altercation at Chill Spot Bar & Grill the night before the shooting during which he reportedly accused Lawrence of giving him talks about his alleged impotence.

Sources said that when Lawrence left the building accompanied by a friend, Jarvis began pursuing them, but was stopped by an off-duty police officer.

One of Lawrence’s friends is said to have accompanied him home, leaving his vehicle in the area.

Jarvis is said to have displayed his firearm and its licence to persons sometime after Lawrence left the scene.

Reports reaching iWitness News are that Jarvis was enraged, allegedly having been taunted about his sexual abilities and accused Lawrence of disrespecting him by boasting that he (Lawrence) had reportedly slept with someone with whom Jarvis reportedly was intimately involved.

Later that morning, Lawrence would be shot and killed, reportedly as he went back to the area — some hours later — to retrieve his vehicle.

The charges against Jarvis and the likely murder charge stand in stark contrast to comments Jarvis made some time ago in an interview inside the compound of Her Majesty’s Prison, where he had gone to minister with a missionary who had ministered to his condemned father at the same prison before his execution on Jan. 26, 1978, when Jarvis was just 5 years old.

In the undated video, which was uploaded to YouTube in Jan. 23, 2011, American missionary, Don Overstreet, spoke about how Jarvis’ father, convicted murderer, James Jarvis, was brave in the face of his execution, having accepted Jesus Christ into his life.

“And it should have been an example for me, but, instead, I followed the wrong direction and went down the wrong path. For many of my years and I reached to the point where had I not made the decision to come to Christ, I would have followed in the same footsteps; my father’s last footsteps. But I am glad to say and, praise God, that I am following in his footsteps, but in a different way,” Jarvis said.

He further said that he had received Christ in his life and had contacted Overstreet.

“And, praise the lord, he is here and we can spend some time in fellowship and talk about what things used to be like and what it is now. I am following Pastor Overstreet’s footsteps — my other father — and going into the prisons now and ministering to the young men in there with the hope and prayers that they, too, will bring their lives to Jesus Christ and realise he is the only way for them and not so much their lawyers and friends and the vices that they are so accustomed to,” Jarvis said in the video.

Among the persons who came out to court Thursday morning was one of Jarvis’ sons, a student at one of the nation’s secondary schools.