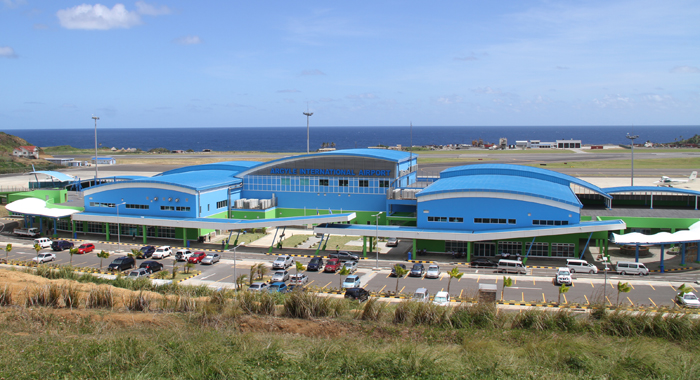 As St. Vincent and the Grenadines celebrated the opening of the Argyle International Airport on Monday and Tuesday, one interesting observation about who spoke at what events did not go unnoticed.

And while St. Vincent and the Grenadines (SVG) has described Taiwan as its most important ally, the nation’s representative did not speak at the huge rally on Tuesday, held to celebrate the beginning of operations at the Argyle International Airport.

Instead, Taipei’s ambassador to Kingstown, Baushuan Ger, spoke at the smaller flag raising ceremony on Monday, which — although attended by thousands of persons — was, based on Prime Minister Gonsalves’ own admission, intended to be a small event.

Minister of National Mobilisation, Social Development, Family, Gender Affairs, Persons with Disabilities and Youth and area representative for South Windward, where the airport is located.

Sir Vincent Beache, a retired politician and former minister of national security, who is also a Member of the Board of Directors of International Airport Development Company, also spoke at the Monday event.

The prime minister delivered the feature address at both events.

But amidst the celebrations, one observer with interest in foreign relations noted that the Taiwan envoy was invited to speak at Monday’s ceremony, rather than the massive one on Tuesday, when commercial flights began departing from and arriving at the airport.

Among the persons down to speak at that event was Prime Minister of Venezuela, Nicolas Maduro and Salvador Valdes Mesa, Cuba’s vice president.

Maduro did not attend the event, which also heard addresses from Guyana’s president, David Granger, who is also chairman of the 15-member Caribbean Community (CARICOM), which includes SVG, and who spoke on behalf of the regional bloc.

Guyana’s Vice President and Minister of Foreign Affairs, Carl Greenidge, also attended the event, representing Georgetown, which has ties with Beijing, rather than Taipei.

In his address at the flag raising ceremony on Monday, Ger said that as “a staunch ally of St. Vincent and the Grenadines, and joining hands with many other countries, Taiwan is very proud to be a partner from the very beginning of this game-changing project.

“We truly admire the far-reaching vision, the resolute determination and unwavering persistence that Prime Minister, Ralph Gonsalves and his Government have demonstrated for this grand project.”

He said that successful completion and inauguration of the airport unveils a new chapter in the economic development of SVG and noted Taiwan’s involvement in the construction of “the landmark terminal”.

The Taiwanese envoy said that since 1981, Taiwan has been a strong partner of SVG in the fields of infrastructure, agriculture, information technology, education and human resources development.

“Along the way we have witnessed many concrete results in the area of infrastructure, such as the Union Island Airport, Learning Resource Centers, National Library, National Tennis Court, Fruit Market, and the Rabacca Bridge, to name a few. Today we are happy to add the AIA Terminal to the long list of successful projects,” he said.

In SVG, Kingstown-Taipei ties had enjoyed bipartisan support from the ruling Unity Labour Party as well as the main opposition New Democratic Party.

But last year, the NDP announced a change in its foreign policy and would switch diplomatic recognition from Taiwan to Beijing, if elected to office.