At student’s funeral, pastor says ‘remember there is a God’ 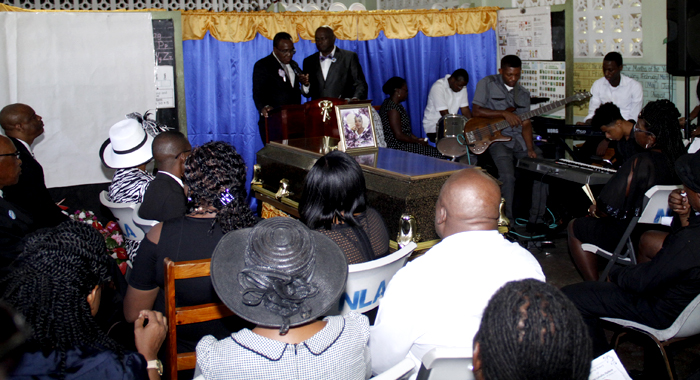 The first of the funerals for the three Vincentians students who died in the Jan. 29 car crash in Barbados took place on Saturday in New Prospect.

In his sermon at the funeral of 18-year-old Carianne Lebrabra Padmore of New Prospect, Pastor Harold Allen told mourners that being a follower of Christ does not mean that one would not face challenges in life.

“But God has promised that those who put their trust in him, he will never leave them nor forsake them,” he said during the funeral at the New Prospect Primary School, where Padmore began her education.

He told mourners that delivering the sermon was not easy for him, adding,  “It is not an easy thing, this afternoon, to be burying my friend, but I trust that God will give me the strength.”

Allen said that change is the only constant in life, but said perhaps there is no more devastating a change than the loss of a loved one.

“It is painful. Change makes us wonder where it is safe to put the root of our faith and trust, the only thing that really lasts then.”

He said that God has promised a new life and the only thing that we can truly count on is God’s faithfulness and our relationship with him — “a relationship that helps us beyond ourselves, beyond our lives, beyond the change and the crisis that we experience every day, and beyond death.”

He based his sermon on Mark 4:35, the story of Jesus calming the storm on the Sea of Galilee.

Allen noted that the leisure day of Jesus and his disciples was disrupted by a violent storm.

“Storms don’t last forever. It comes in our lives and brings discomfort, causes a lot of things to be out of place…

“First of all, we are reminded that although the sovereign of the universe was on the boat, there was no guarantee for the sudden, in this case, a sudden storm.”

He said it is a mistaken notion of many that if a person is faithful to Jesus Christ, he or she is protected from troubles of life. That’s a myth.”

Allen said that life is real and there are some real things that happen in life whether one is a follower of Christ or not.

“So don’t think for a moment that Christians don’t face some things also in life. Sometimes, we feel that our children will be successful, sickness will never come their way, financial ventures will always succeed and disappointment will never knock on our door.”

He said the Bible shows that some of the men who served God endured difficulties, including all but one of the original disciples.

“Oh my friends, this evening, when the night gets so dark and gruesome, when you cannot rest, when sleep is so far away from you, remember there is a God that is looking down on you and he is always there,” Allen told mourners.

Padmore, along with fellow St. Vincent and the Grenadines Community College students Aziza Awanna Dennie, 19, of Redemption Sharpes and Danee Deverey Horne, 18, of Questelles, died when the car in which they were travelling was involved in an accident with a van.

Their schoolmates, Kemelius Boyea, 19, of Chateaubelair and Darren Renaldo Daniel, 18, of Campden Park, survived the accident, which also claimed the life of the driver, 23-year-old Barbadian, Andre Jabarry Gittens.

The students had successfully completed an internship at the Crane Hotel in Barbados and were on their way home from a staff party held in their honour.

They were scheduled to return to St. Vincent on the day of the accident.

Horne funeral’s will take place this (Sunday) afternoon, but her family, in response to an inquiry by iWitness News, said that they would prefer if there is no media coverage of it.