‘It’s like I am lost,’ says Vincy student who survived Barbados car crash 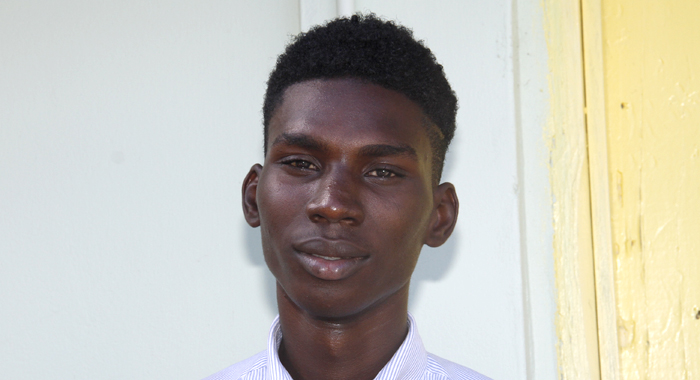 Kemelius Boyea survived the accident that claimed three of his schoolmates. (iWN photo)

One of the two Vincentian students who survived the Jan. 29 car crash in Barbados that claimed the lives of three of his schoolmates, says he doesn’t know how he feels about the tragedy.

“I honestly don’t have words to express how I feel, but I know it’s not a good feeling at all. It’s like I am lost to the world. I don’t know what to do. It’s like I am lost,” Kemelius Boyea told iWitness News on Saturday in New Prospect at the funeral of Carianne Lebrabra Padmore.

Padmore, 18, of New Prospect, along with Aziza Awanna Dennie, 19, of Redemption Sharpes and Danee Deverey Horne, 18, of Questelles, all students of the St. Vincent and the Grenadines Community College, died in Barbados on Jan. 29 when the car in which they were travelling was involved in an accident with a van.

Their schoolmates, Boyea, 19, of Chateaubelair, and Darren Renaldo Daniel, 18, of Campden Park, survived the accident, which also claimed the life of the driver, 23-year-old Barbadian, Andre Jabarry Gittens, an employee of Crane Hotel.

The students were in Barbados since December for an internship at Crane Hotel and were to return to St. Vincent on the morning of the accident.

Boyea, who suffered a wound to his right kidney and a punctured lung, returned to St. Vincent on Tuesday.

He told iWitness News that the internship was “really, really exciting”.

“I learnt so many different things, a lot of Bajan cuisine,” he said, adding that he also made a lot of friends.

Boyea told iWitness News that he turned to classes at the Technical and Vocational Division of the college on Wednesday.

“Everybody was like watching — well, my closest friends, they came and they hugged me; some were crying and stuff,” he told iWitness News, adding that he felt as if some of his schoolmates did not know how to respond to him.

Boyea told iWitness News that he has no memory of the accident that claimed the lives of three of his schoolmates.

He said that all he can remember from that night was what took place during the party held by the hotel to celebrate the successful completion of their internship.

“We were dancing, we were interacting with the other co-workers and so on. Because the impact was so great, I lost consciousness,” he said of the accident, adding that he can’t recall anything of when they were in the car.

And even as Boyea struggles with the psychological scars of the experience, he is also “not too sure” that he is healed physically.

“But I am recovering,” he told iWitness News.

He said that Padmore was a “really, really good” person.

“She inspired me,” he said.

“When we checked our results in Barbados, I showed her my results and she said, ‘Kem, you see the reason why you need to behave yourself? Because you are doing so well and people expect great things from you and you need to show them what you are capable of. ’I looked up to her because she was really good and she was very mature,” said Boyea, who is into the final year of his programme.

Padmore was buried at the Biabou Cemetery after a funeral service at the New Prospect Primary School, from which she graduated.

Horne will be buried in Penniston on Sunday, after a funeral service at the New Testament Church of God, Lowmans Hill.

Dennie’s funeral will take place on Feb. 26 at the Faith Deliverance Church in Redemption Sharpes.

Before dying in car crash, student thanked mother for love and care

One reply on “‘It’s like I am lost,’ says Vincy student who survived Barbados car crash”