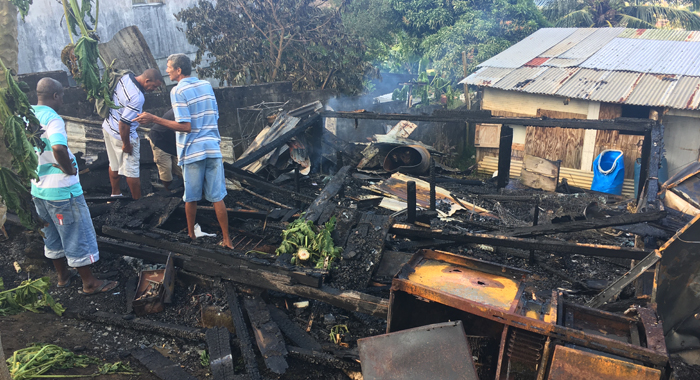 Persons look on at the burnt-out remains of the house on Monday. (iWN photo)

Police are investigating the death of a Green Hill man who is believed to have died when the house in which he lived caught fire Sunday night.

The dead man has been identified as Andrew Nero, said to be around 42 years old.

Neighbours told iWitness News that they discovered the fire around 11 p.m.

However, at that time, the wooden house was already engulfed in flames and the door was locked.

Neighbours said they heard the man say “O God” inside then heard nothing further from him.

Fire fighters responded but were unable to save the house or the man.

Nero’s death brings to three the number of persons to be killed in house fires over the past few weeks.

On Feb. 5, an 18-month-old baby boy died in a fire that destroyed the small wooden house in which his family lives in Ottley Hall, a community in West Kingstown.

His sisters, ages 3 and 5, were rescued and were treated for first- and second-degree burns.

On Jan. 15, Cecil Ferdinand, who was in his 70s, died in a fire at his Rose Hall home in North Leeward.