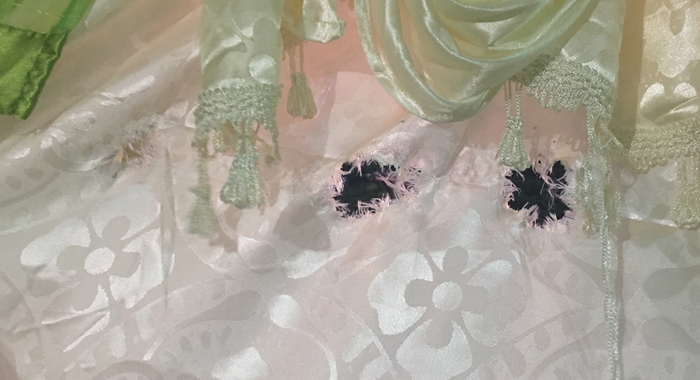 Damage to the curtain from when the gunshot was fired into the house. (iWN photo)

Three masked gunmen stormed into a Rillan Hill home during a child’s birthday party last Tuesday, Feb. 14, and robbed the family of cash and jewellery and stole their car.

Josette Browne told iWitness News that she had brought together her mother, two of her sisters, a niece — who live elsewhere –and two of her sons to celebrate her elder son’s birthday, which was on Feb. 15.

They were in the house around 7:15 p.m. when they heard a loud explosion that turned out to be the sound of a shotgun fired through the front door curtain and onto the ceiling of her apartment, located on the ground floor of a two-storey house.

“Just as we heard the explosion, we noticed somebody in all black entered the house and then two more came in. They had on masks. The first one that came in had a gun like my hand so,” Browne said, showing the full length of her arm.

She said everybody jumped up and ran towards the bedrooms and bathroom.

Browne said she locked herself in the bathroom and one of the gunmen came knocking it, ordering her to come out.

She said that when she came out of the bathroom, the gunmen commanded them all to lie on the floor.

“And they were saying, ‘Pass it over! Pass it over!’” Browne said, adding that she asked the intruders what they were looking for.

One of the gunmen again said, “Pass it over! Give me all alyo phone!”

Browne said that the gunmen told her to get up and come with them.

They took her to the bedroom and the one with the shotgun hit her in her head, causing her eye to swell up.

“He kept telling me, ‘Pass it over’,” she said, adding that she told the robbers that she is a poor person and they could take whatever they saw in the house.

The men took an EC$20 bill that she had on a dressing table that was her son’s birthday gift, EC$20 she had in her purse and EC$10 that her sister had in her pocket.

The robbers also emptied her workbags but apparently didn’t find what they were looking for.

They kept saying, ‘Pass it over, pass it over’,” Browne said.

She said they also took the jewellery from off her dressing table, including six gold rings and also took a half bottle of nut and rum, and some bottles of local drinks — cherry, beet, and beet with milk — from the fridge.

Before leaving, they ordered Browne’s sister, who was visiting, to hand over her car keys.

The car was found crashed in another area of the village later that same night.

One reply on “Gunmen rob family during children party”