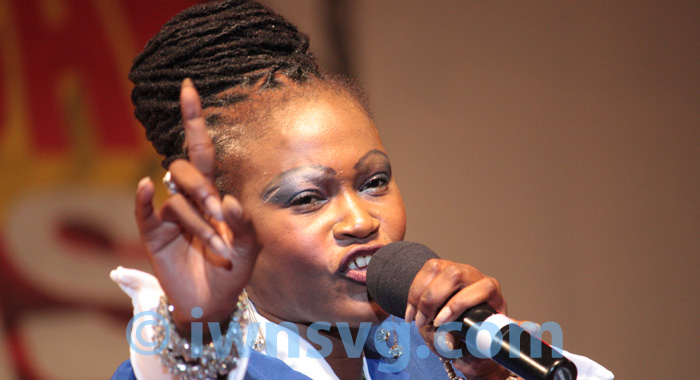 Minister of Culture in St. Vincent and the Grenadines, Cecil “Ces” McKie, has described as “terrible” a development in Trinidad and Tobago in which Vincentian Lornette “Fire Empress” Nedd-Reid was kicked out of that country’s national calypso monarch finals because of her nationality.

Fire Empress, speaking separately on Wednesday, said that the battle is not over, adding that she will file an injunction against the competition if her questions are not answered.Late Tuesday, the Trinbago Unified Calypsonians Organisation (TUCO) kicked Fire Empress out of the competition, saying it is only for nationals of the twin island republic.

Late Tuesday, the Trinbago Unified Calypsonians Organisation (TUCO) kicked Fire Empress out of the competition, saying it is only for nationals of the twin island republic.

The decision to exclude her from the competition came after the organisation received a pre-action protocol letter from lawyers for Lynette “Lady Gypsy” Steele, who narrowly missed out on a place in the final after placing 16th in last Sunday’s semis.

Speaking on Xtreme FM Wednesday morning, McKie noted that the decision to exclude Fire Empress comes after she has been competing and winning calypso competitions in Trinidad and Tobago for years.

“How could you have somebody competing in your country, winning competitions, not having changed her status, competed in your semi-finals, made it to the finals, you announced her in the finals, and then all of a sudden, you realise that she is not suited to compete in your finals?” McKie said.

“That really cannot stand. I can’t see that standing. You should have known that a long time ago. If it’s a loophole in the system, they will have to fix that after, not before. Certainly not now,” he said.

Speaking separately on Xtreme FM on Wednesday, “Fire Empress” said “all is not ended” despite the development on Tuesday.

She said she has been a member of (TUCO) since 2007 and pays $250 every year to be a financial member, adding that she has also won several calypso competitions in Trinidad and Tobago.

“So it was alarming to me yesterday, it was news to me yesterday, just like to anybody else, when they told me that they have a handbook that states that you are supposed to be a national of Trinidad and Tobago in order to compete in calypso finals.”

Fire Empress said that TUCO’s letter to her did not mention nationality criteria for any other competition, but the calypso monarch.

“And that is still news to me, because I have been in the calypso competition since 2012, when I made national queen and then went on to win the monarchy in 2014 in Tobago. So, all of this is news to me. So I am getting a lawyer and seeing what could be done about the situation right now.”

The artiste, who has also won the national calypso monarch several times in her birth country, said she was never told before that she couldn’t compete for the crown in Trinidad and Tobago.

“This is so serious because I’ve touched every other stage. You know when you set things as an artiste and you want to make goals, this is one of them that I have on my book and it was the only one that I have not got onto… And it was the one I was putting all my eggs in…

“It’s sad to see the circumstances that are surrounding it now.”

Fire Empress said that the letter she received on Tuesday asked her to provide proof that she is a citizen of Trinidad and Tobago.

She said she is taking TUCO’s letter to her lawyer, adding that she voted in the organisation’s elections a few months ago, using her St. Vincent and the Grenadines national identity card.

“And nobody said anything. So, how it is now, it’s ok to vote, it’s ok for you to take money from me every year to be a financial member and to compete in these competitions, only to get to the final stage and for them to tell me no, you can’t be a part of the competition, you are not a Trinbagonian.”

Fire Empress said that if her questions are not answered, she will ask her lawyers to file an injunction against the competition.