How many persons came to St. Vincent on the Valentine charters? 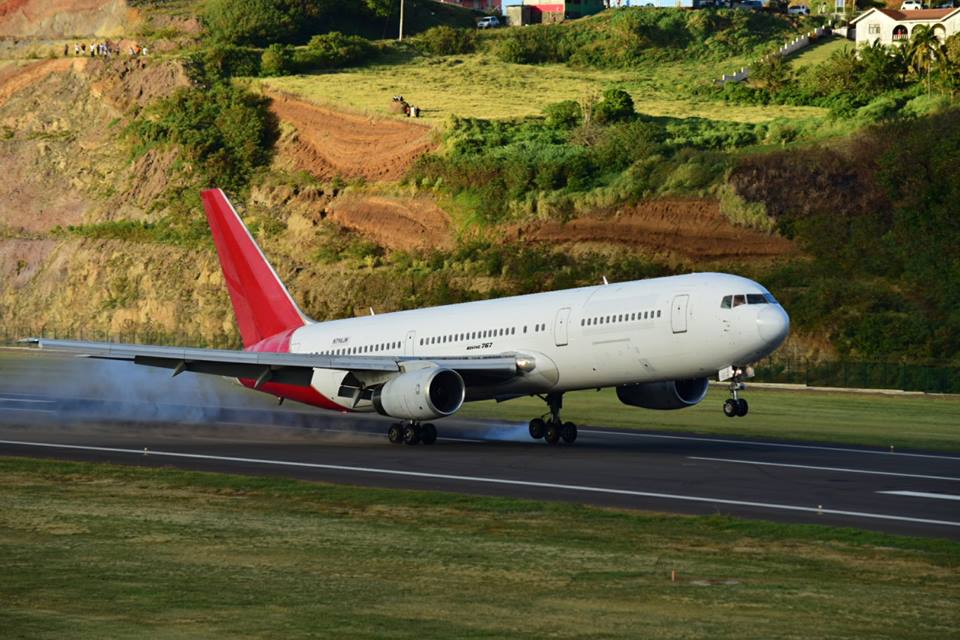 Minister of Tourism, Cecil “Ces” McKie says that his office will, on Thursday, release the figures on the number of persons who arrived and departed St. Vincent and the Grenadines on the international charter flights arranged by his ministry to coincide with the Feb. 14 opening of Argyle International Airport (AIA).

The government arranged a chartered Caribbean Airlines flight from New York and a Sunwing Airlines charter from Toronto, which brought in passengers on Feb. 14 and took them back on Feb. 21.

When he announced the charters in January, head of the Tourism Authority, Glen Beache, had expressed confidence that they would have sold out within one hour of the details being made public.

Beache had said that the Tourism Authority, a state-owned agency, would pay for the flights up front and would recoup the money through ticket sales. He did not announce the exact cost, but said it could amount to US$100,000 per flight.

So far, all indications are that none of those flights was fully booked.

iWitness News was able to determine from a passenger on the Sunwing flight from Canada that there were 131 passengers on the 170-seater plane.

But our repeated attempts over the past week to get from various government officials and departments the exact number of persons who arrived and left the country on the flights were not met with much success.

Prime Minister Ralph Gonsalves told iWitness News at a press conference on Monday that he did not have the figures.

“Those are things which you can get. We should be able to get them. They will have a number,” he said, and directed iWitness News to the Tourism Authority.

Gonsalves, who greeted arriving passengers at the airport on Feb. 14, said that from what he observed, the numbers coming out of Toronto were larger than those that came from New York.

“There are some people who actually came from those countries before, in the normal way, just because they wanted to be on the ground on the morning to watch those arrive. But those are numbers that you should be able to get.”

The “normal way” meant that the persons travelled to St. Vincent via a neighbouring country with an international airport before AIA saw its first commercial flights on Feb. 14.

Gonsalves said that the Tourism Authority and the Immigration Department would coordinate the data regarding arriving and departing passengers on the chartered flights.

In addition to the Caribbean Airlines and Sunwing charters, Guyana-based Roraima Airways also arranged an EasySky charter from Cuba and a Dynamic Airways charter from Guyana, both of which landed at Argyle on Valentine’s Day, en route to Guyana.

The return leg of the Caribbean Airlines and Sunwing charters took place on Tuesday, Feb. 21.

However, the return leg of the Dynamic Airways flight to New York did not take place as it would have taken passengers from St. Vincent to Guyana, where they would have had to wait for some four hours before flying to New York.

McKie appeared on Xtreme FM on Wednesday and told iWitness News in calls to the radio programme that some 250 persons arrived on the flights, adding that the exact numbers were available from the Tourism Authority — which falls under his ministry.

He said that he could not say why the figures have not been received because he has not been on the receiving end of the requests.

“You can get the figures tomorrow,” McKie told iWitness News, noting that he had to attend the meeting of Cabinet on Wednesday.

In response to similar questions from an unidentified caller, McKie repeated that he had said about 250 persons came in on all of the flights.

“Why are we still trying to make a negative out of these things?” he asked the caller.

“The airport was opened, persons came home, the airlines insisted that they were going to land at Argyle. Why are we trying to make an issue of that?”

He further accused McKie of having said that SVG will double the number of persons arriving by air when the airport begins operating, something that McKie denied.

“I never said that. Never ever,” McKie responded, adding that the World Bank has indicated that within the first three years of operations of AIA, visitor arrivals by air in SVG is expected to increase by 10 per cent.

But in November 2013, McKie told regional media that his government was expecting visitor arrivals to triple within the first two years of AIA beginning operations.

“We expect to triple the numbers (of tourist arrivals) within two years, once the airport finishes,” he told the Caribbean Media Corporation in New York, adding that a number of airlines in the United States, Canada and the United Kingdom had been invited to St. Vincent and the Grenadines before the end of 2013 for talks.

In a separate telephone conversation on Wednesday, Beache told iWitness News that the figures on last week’s chartered flights “are not out yet”.

“The flights just left yesterday. We haven’t consolidated our numbers yet,” he said in reference to the return legs of the flights.

He said had “no indication yet” of when the figures will be available.

“I am waiting for my staff to work with the tour operators to find out what the numbers are,” Beache said.

He said had “no indication yet” of when the figures will be available.

“I am waiting for my staff to work with the tour operators to find out what the numbers are,” Beache said.

13 replies on “How many persons came to St. Vincent on the Valentine charters?”