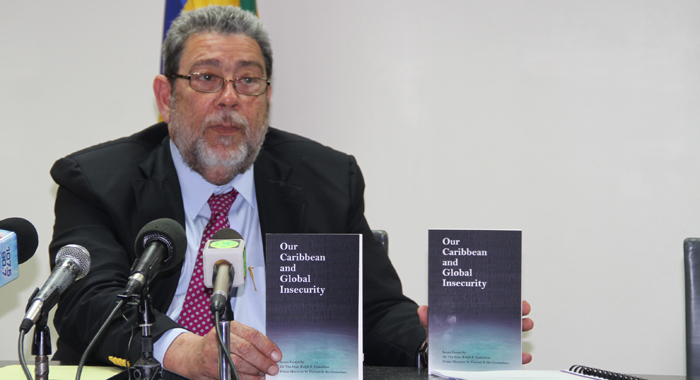 Prime Minister Ralph Gonsalves, on Monday, used a press conference to launch formally “Our Caribbean and Global Insecurity”, his fifth book in the last seven years.

“The event is so important of the Argyle International Airport that I thought that I should have a book published on the occasion. This is it: ‘Our Caribbean and global insecurity’,” he told reporters.

The book is a collection of seven essays on a number of topics, including the legacies of Caribbean thought leaders such as Gordon R. Lewis, Maurice Bishop and Errol Barrow.

It also addresses topics such as nationalism, regionalism and internationalism, theology and the church, the Cuba-United States Accord and global insecurity.

“This is the fifth book that has been published in seven years by this sitting prime minister. There are other stuff which I have written which I have been readying for publication,” Gonsalves said.

Gonsalves also hinted at some of the material that he is currently working on.

He said he has listened to a number of young trade unionists and realise that they don’t know the history of their union movement.

“Sometimes, I hear things and I’m working at the moment on a book. I have the base material already. I have some work still to do. I am hoping I can get it done this year…

“Almighty God has given me a particular gift among my many weaknesses, to be able to research and write. He has given me certain gifts in leadership. I try to use them and the time is getting nearer and nearer to the end. So, I have to do the best I can remaining with the time,” the 71-year-old leader said.