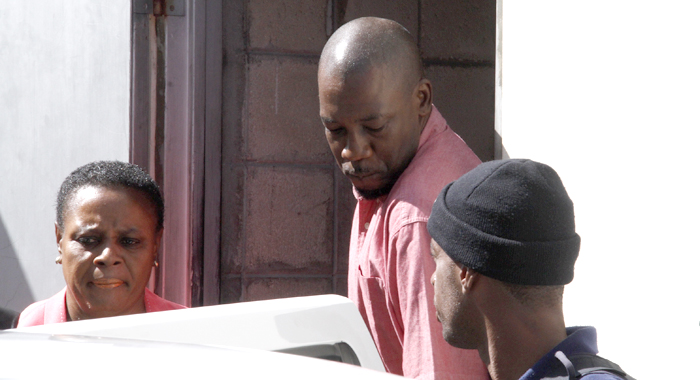 Murder accused Junior Jarvis, centre, is escorted by police as he leaves the Serious Offences Court of Friday. (iWN photo)

The door to bail was slammed shut on former journalist, Junior Jarvis, on Friday when he appeared in court, charged with the Valentine’s Day murder of banker, Randy Lawrence.

Police say that Lawrence, 39, died in hospital of blood loss and gunshot wounds after being shot multiple times in Arnos Vale on Feb. 14.

Jarvis, a 44-year-old marketer and former journalist, appeared at the Serious Offences Court on Friday, charged with Lawrence’s murder.

He was also charged that on Feb. 14 at Arnos Vale, he, by force, caused Arisha Pompey to go from her home in Arnos Vale to the vicinity of Options Supermarket — an abduction charge.

The charges were laid indictably, and, therefore, Jarvis was not required to plea.

Bail was also not open to him and Jarvis has been remanded to prison, pending the outcome of court proceedings, which begin July 1.

The prosecution told Chief Magistrate, Rechanne Brown-Matthias, that the crown intends to call between 20 and 30 witnesses.

Jarvis had, one week earlier, been slapped with three charges even as investigators awaited an autopsy on Lawrence’s body.

He was charged that, on Feb. 14, he attempted to murder Josette Smith of Arnos Vale, entered her house as a trespasser with a gun and also used a gun in the commission of an offence.