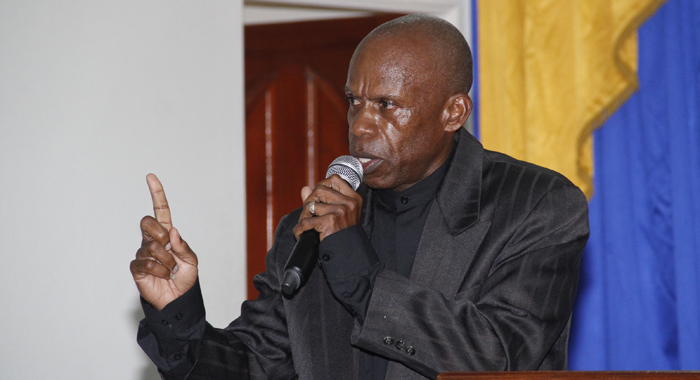 Bishop Julius Louis delivers the sermon at the funeral on Sunday. (iWN photo)

A local pastor has noted the demise of a number of St. Vincent and the Grenadines Community College (SVGCC) students who have met their deaths in tragic circumstances, after midnight, over the past few months.

Dennie and her schoolmates, Daneé Deverey Horne, 18 of Questelles; and Carianne Lebrara Padmore, 18, of New Prospect, died when a car in which they were travelling was involved in an accident with a van at around 3 a.m. on Jan. 29 in Christ Church, Barbados.

They were returning from a staff party held at Crane Resorts to celebrate the successful completion of their internship at the hotel, as part of their studies.

Louis seemed to have not anticipated that his comments would be met with mixed responses and prefaced them by saying that when he speaks from God’s word, he will owe no apology nor have to be disappointed for speaking “from the highest authority” — a reference to the Bible.

He said that something is happening in the nation that has him deeply concerned and should be of concern to everyone.

“But thank God for the opportunity this afternoon to bring it to us, and, I trust that by God’s grace, it will go even further from here,” Louis told mourners at the Faith Deliverance Church.

He said that a few months ago a young “college student” died in an accident “somewhere in the country side, after midnight”.

Louis was apparently referring to Kiara Shortte, 17, who died Aug. 19, 2016 when a sport utility vehicle in which she was travelling went over an embankment in Hope Well, Marriaqua sometime around 3 a.m.

Shortte was a recent graduate of the Adelphi Secondary and had obtained seven of the eight CXC subjects she wrote.

The bishop also mentioned the Dec. 31, 2016 death of 19-year-old Community College student Onixy Hamilton of Troumaca, who died when the car he was driving crashed in Chateaubelair.

“Have we ever stopped and asked ourselves the question of the spiritual battle that we are in for our youths? Did anyone stop to think how many of our young people, after midnight, are meeting their death.”

Louis noted that in Exodus, the death angels passed over those persons whose houses had the blood of a lamb over the door, as God has commanded.

“I want to believe, and it is my conviction, based on scripture — please my friend, I am not here to offend anyone, but I am here to declare the word of God unapologetic[ally]. I cannot apologise but I believe that there is something that is called untimely death.”

He said that some people get offended because of God’s word but said it is better that God’s word “trouble us and we get it right, than we pretend”.

“If someone would have stopped and say hey — hello, I am not attacking anyone and anywhere and any situation, but I am looking at how our youths’ lives are taken away after midnight.”

Louis noted the Bible said that Paul and Silas prayed at midnight.

“Midnight is a very critical, essential, sensitive time in the life of humanity and if only someone would have given thought to it — maybe not for the first one, but the second one,” he said, referring to the recent, tragic deaths of young Vincentians.

“Please, my friend, I don’t want to offend anyone. Don’t leave here and drag me in the gutter, but I want to make an appeal, as from today, the 26th day, let us try and ensure that our daughters and our sons are in our home before midnight.

“I am looking at six young lives, young college students, all lives were taken after midnight, not in their homes but on the streets by way of accident,” he said, including among the dead, the Barbadian — 23-year-old Andre Jabarry Gittens  –who was driving the vehicle in which the three Vincentians met their death.

Gittens was not a college student, but an employee of Crane Resorts.

Louis said: “Lord, help me. Is any journalist here? Just be careful how you quote me.”

He told mourners that the enemy is stopping at nothing to ensure that the bright future of young people is taken away before they can achieve anything.

“Parents, try your best. Let’s work assiduously to ensure our sons and daughters are in our home before midnight. Things happen at midnight, spiritual things, spiritual things, and spiritual forces. There is a war, there is a battle, a real battle for lives at midnight,” he said and encouraged mourners to read Exodus, pointing to the recent death as proof that it is still current.

“Can you help me empty Heritage Square and fill the churches?” Louis said.

Sunday’s funeral heard tributes from the staff of the Technical Division of the SVGCC, where Dennie was enrolled, and also from the director of the college, Nigel Scott.

Among others, Kemelius Boyea, one of the Vincentians who survived the accident, paid tribute in song, holding hands with a lecturer at the college as he sang.