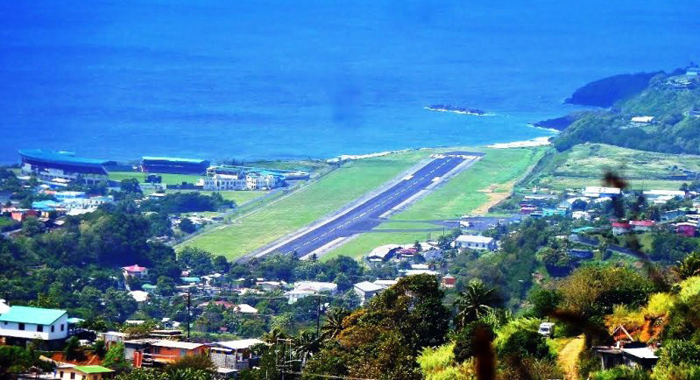 Prime Minister Ralph Gonsalves, on Friday, denied that his government has sold any of the lands at the decommissioned E.T. Joshua Airport, but urged local investors to take advantage of the opportunities there.

The Unity Labour Party administration has announced its intentions to build a new city at the airport site, but, so far, only Trinidadian Derek Chin, chair of MovieTowne, has expressed interest in the site.

“And I’m hoping that as a consequence of this conversation that interested local investors would come,” Gonsalves said on Boom FM on Friday.

“You know, I find that too many times that we put these calls out and a number of local investors they just hang back. It’s like many of them hang back when we are talking about — local and even regional — about buying equipment for the ground handling out at Argyle and building the cargo terminal. But we eventually went and did all of those things…”

The government has said monies from land sales at the old airport would to help repay the EC$400 million debt left by the construction of the EC$700 million Argyle International Airport.

Gonsalves spoke of the types of developments he would like to see at Arnos Vale.

“I want to see some of the kind of things we are talking about — Derek Chin from Trinidad. And he not only has stuff in Trinidad, he is finishing a complex in Guyana, and I understand he wants to go to Grenada. He is talking there, so he is, obviously, building out a regional brand. And apartment complexes, offices, shops – you know what I mean. But I need to have a magnet, which grounds it, and the big magnet, which is grounding that is the acute referral hospital. Well, that is one big magnet, but you need to have a couple of them. At least, that is the concept.”

Gonsalves said that it was “absolutely not” the case that his government has sold the lands at the airport, as the host of the programme said was claimed on another radio programme.

“The only thing which we have firmed up, thus far, in respect of Arnos Vale is where a World Bank study had identified eight acres to have the acute referral hospital, about 130 beds, a lot of tertiary health care, secondary ones too,” Gonsalves said.

He said that there is also a soft loan under the Regional Disaster Vulnerability Reduction Project programme with the World Bank where a design of the hospital is in process.

Six entities have applied to do the design and one will be selected, Gonsalves said.

“I don’t deal with that. They just tell me which one has been selected because we do these things by an independent tendering process and in conjunction, in this case, the World Bank.”

Gonsalves said the entire package, including the design and site identification, would be delivered to the government within two years.

He said he is trying to identify possible sources of financing.

“I don’t know the ballpark figure yet, but you begin to tease it out,” he said, adding that he is hoping to get the bulk of the financing from the World Bank.

He said his government, however, has a memorandum of understanding with Derek Chin in relation to consideration for an entire complex, including a plaza, MovieTowne, and a boutique hotel.

“These are the concepts which we are talking about but nothing has been agreed upon because there are some practical things.”

Gonsalves said a lot of money is going to be spent on infrastructure, including the construction and installation of roads, electricity, sewerage systems, drains, telecommunications systems, and water, in keeping [with] the master plan.

“And the details of that, who to finance what and so on, obviously, the optimal way to do that is if we have the money that we, ourselves, can do all those things so that when people come along, we have expended a certain amount of money and we say, ‘Well, look, this is what is involved.’”

Gonsalves said the MOU that his government has signed with Chin is “non-binding”.

“It doesn’t have, it doesn’t create, legal relations. It is where people are sitting down, exploring, talking about this matter and that we have an understanding that we will continue to talk in these terms. But there are lot of details to be hammered out and I wanted to make sure that we have a framework for all those details, and I have somebody to help me drive the process.”